Photos and accurate descriptions of where and when the animal(s) was sighted are critical when making a report. Detailed information allows the Victorian government to make a timely and positive identification. All reports are responded to as a priority and may result in trapping, surveillance and the removal of confirmed Canada goose.

The Canada goose is not native to Australia and if given the opportunity could establish and breed in Victoria. Should they become established they have the potential to negatively impact on the environment, agriculture, urban areas and human health. Early detection is critical to preventing their establishment in the wild.

Canada goose are classified as a regulated pest animal under the Victorian Catchment and Land Protection Act 1994.

The Canada goose is not known to occur in the wild in Australia however there have been several reports in the past in New South Wales. The most likely source will be either from captive collections or migrations from New Zealand.

How to identify a Canada goose

They are brown and white and have a distinctive white patch on their cheeks and chin. They have a long black neck and head. The bill, tail, legs and feet are also black. Their underwings are dark.

On their rump is a white V-shaped mark which is visible from above and when the bird is taking off. 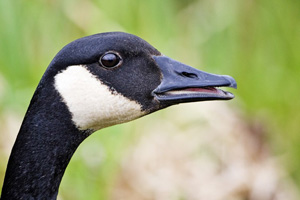 They can occupy a diverse range of habitats which include:

They can also live in urban areas where there are extensive lawns and or water bodies including:

Their nest is usually located on the ground near to water. The nest is a large mass of vegetation lined with down. However, sometimes the goose builds nests off the ground. During breeding 4 to 7 white eggs are laid. 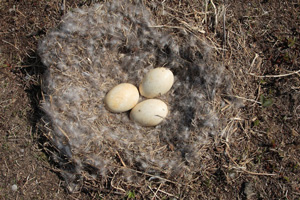 Many Canada goose populations are migratory. When in groups they fly in a striking V-formation with neck outstretched. They often honk loudly. 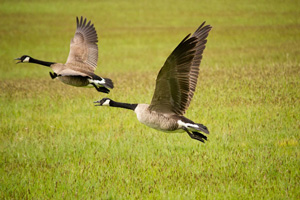 Their voice call is loud and consists of loud honks, barks, cackles with some hissing. They honk as they fly.

The Canada goose does not look similar to any native species. The combination of their long black neck and head, distinctive white facial patch, black legs and feet, and honk are key distinguishing features.

They are considered a moderate pest to agriculture overseas as they impact on pastures and crops.