Exotic toads such as the cane toad (Rhinella marinus) and the Asian black-spined toad (Duttaphrynus melanostictus) pose a serious threat to Victoria's environment.

Exotic toads are often confused with native frog species and many people have difficulty telling them apart. Many of the cane toad reports Agriculture Victoria receives are actually the native eastern banjo frog, also known as the pobblebonk (Limnodynastes dumerilii).

Before making a report of an exotic toad, use this information to check the features of the specimen you have sighted and compare the prominent identification characteristics that set native frogs apart from exotic toads.

If still in doubt, email photographs to Agriculture Victoria at highrisk.invasiveanimals@agriculture.vic.gov.au or contact the customer service centre on 136 186, with details of the animal, and a member of staff will contact you.

The cane toad has a distinct pointy snout and prominent bony ridges over each eye, meeting at the nose.Their eyes have a horizontal pupil and are set in a warty, bony socket. Toads have a parotoid gland and external ear drum behind each eye-ridge.

The skin of a cane toad is dry, warty and leathery. Their skin colour ranges from light yellow, brown, reddish brown to almost black and the underside is usually a dirty cream colour. Habit: Nocturnal, becoming active in large open areas, such as on roads and lawns. Can be found congregating beneath street lamps and other lights to catch insects.

Call: Sounds like a guttural trill and is sustained for about 30 seconds.

The Asian black-spined toad has raised, black, bony ridges over each eye, meeting at the nose. Their upper lip has a prominent black rim and they have a distinct, pointy snout. The toads have a parotoid gland behind each eye-ridge, which excretes a poisonous milky substance and their ear drum is visible and is positioned behind the eye. The skin colour of the toad is highly variable, but they are most commonly pale yellow-brown with raised black warty spots all over the body. They have a white, cream or pale brown underside with black brown spots. Their skin is rough, not moist and slippery. Asian black-spined toads have short hind limbs, with pimple-like warts on their feet and toes and their front toes are black-tipped and hooked. Characteristics of the Asian black-spined toad include:

Habit: Nocturnal, becoming active in large open areas, such as on roads and lawns. Can be found congregating beneath street lamps and other lights to catch insects. Adults shelter during the day under rocks, leaf-litter, logs and man-made structures such as drains, rubbish piles and sometimes houses.

Call: Sounds like a telephone dial tone (creo-o-o, cro-ro-ro-ro) sustained for about 30 seconds. Characteristics of the native pobblebonk frog include:

Habit: Most are nocturnal. Habitat varies, but all prefer moist environments and will mostly be found near water as most are still dependent on water to complete their life cycle. However, it is not unusual to find it some distance from water sources. Eastern banjo frogs are burrowing frogs and are often found while digging.

Call: Various, typically a 'bonk' or 'pobblebonk' type sound, all very different to the cane toad and Asian black-spined toad. 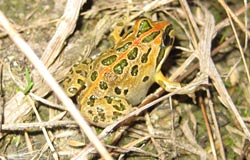 The spotted grass frog is found all over Victoria. Its average adult length is 4 to 5 cm. This frog is light brown to olive-green on the back with irregular darker spots and blotches. They usually have a pinkish, yellow or white stripe running down the middle of the back and a raised pale stripe from below the eye to the arm. Their belly is white and smooth. The giant burrowing frog is found in south-eastern Victoria. Its average adult length is 9 to 10 cm. This frog is usually grey, dark brown or black on its back and white on its belly. The sides of its body have scattered yellow spots and a stripe runs from under each through to each ear. The skin on their back is rough and warty. The Eastern smooth frog is found in south-eastern Victoria. Its average adult length is 3 to 3.5 cm. This frog is grey or brown on its back, often with a number of scattered black-edged red spots and dark markings. Its belly is white or light grey with brown or grey flecks. 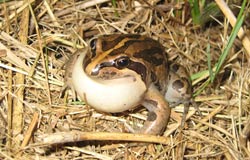 The striped marsh frog is found in southern Victoria. Its average adult length is 6.5 cm. This frog is light brown or grey-brown on its back with darker brown stripes. It has a pale stripe running down the middle of its back, and a pale raised stripe running from below each eye to the arm. Its arms and legs are scattered with irregular, dark spots and bands and its belly is white. The barking frog is found in north-western Victoria. Its average adult length is 5 cm. This frog is light green or brown on its back with darker blotches and spots. It often has a pink or purplish patch on the back of each upper eyelid. The skin on its back is smooth with low, round warts. Its belly is white and smooth. The giant banjo frog is found in north-western Victoria. Its average adult length is 9 cm. This frog ranges in colour from pale yellow, fawn to red-brown on its back with a few small dark flecks and spots. It usually has a broad orange band down the sides of its body. Its belly is yellow with black flecks and its groin is marbled black and yellow. The skin on its back is smooth.