Hover flies, often referred to as flower flies or drone flies, ies are beneficial insects that appear in large numbers during the spring and summer. They are often mistaken for bees or wasps and can cause undue fear over possible stings.

Fortunately,  they do not possess stingers. Hover flies can be readily distinguished from wasps and bees by their single pair of wings. 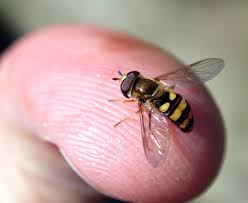 Hover flies belong to the order Diptera and the family Syrphidae. As can be seen in Figures 1, 2 and 3, hover flies, like all true flies, only have one pair of wings.

In comparison, bees and wasps have two pairs of wings.

Hover flies also have a typical fly head with short antennae and bulbous eyes (Figures 1 and 3). 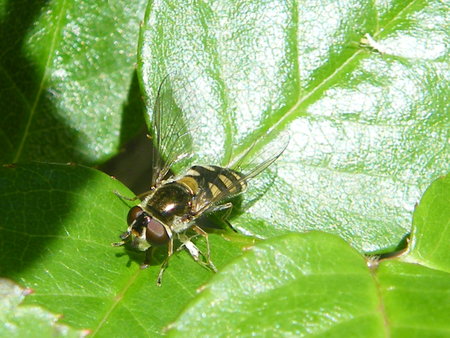 Adult hover flies are 4-10 mm long and have dark flattened bodies with black and yellow markings.

During flight, many hover flies move in a characteristic way. As their name suggests, they hover over objects but will also dart to and fro.

The immature hover fly looks like a maggot and can grow up to 10 mm long. The larvae hunts by touch. They have mouth hooks which grip and pierce the skin of their prey prior to extracting their body contents (Figure 4). In comparison, bees and wasps have two pairs of wings.

During flight, many hover flies move in a characteristic way. As their name suggests, they can remain in one spot, but also dart to and fro.

Hover flies may also have a typical fly's head with short antennae and bulbous eyes (Figures 1 and 2).

Management is usually not necessary and hover flies are  beneficial insects They are considered the second most important pollinator next to bees (Figure 2). Further, some species of hover flies can control garden pests such as soft-bodied aphids and scale insects.

Report any unusual plant pest or disease immediately to the national Exotic Plant Pest Hotline on 1800 084 881. Early reporting increases the chance of effective control and eradication. Alternatively, you can make a report via our online form with a photo (where possible).