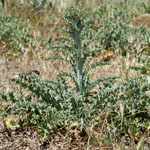 Illyrian thistle is an erect annual or biennial herb growing to a height of 2m.

Stems are erect, woolly and whitish in colour. They are very prominently winged, spiny and branched near the top.

Illyrian thistle leaves are densely woolly and a whitish colour. They have deep lobes, coarse teeth, and spines on the margins.

Leaf bases continue down the stems as wings. 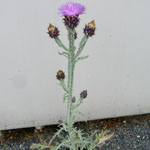 Illyrian thistle has purple florets with globular heads that grow to 8cm in diameter, including numerous bracts. 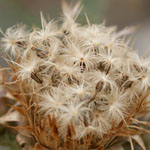 The seeds of Illyrian thistle are light brown to grey, 5 to 7mm long and have minute pits over the surface.

They are quadrangular in shape and are transversely wrinkled and flattened.

The pappus holds a collection of silky feathery hairs 8 to 10mm long.

Illyrian thistle's only method of dispersal is by seed which is equipped with a pappus of fine hairs and is spread by both wind and water.

Seedlings germinate at any time of the year but predominantly after autumn rains. Growth slows during winter. Rapid growth occurs during spring. Plants may flower in the first year of growth but is generally delayed till the second summer.

Illyrian thistle prefers moderately warm environments such as rocky hillsides in subhumid temperate regions. In Australia it is confined to areas of winter-dominant rainfall with an annual total of 600 to 800mm, and occurs on neglected sites and pastures of reasonable fertility.

The weed can also tolerate periods of drought due to its large tap-root.

There are very few known infestations of this weed in Victoria.

The icons on the following table represent the times of year for flowering, seeding, germination, the dormancy period of Illyrian thistle and also the optimum time for treatment.

The seeds contaminate wool, other agricultural produce and equipment. The plant is likely to be troublesome in annual clover pastures, particularly those which are left bare at the end of summer as this enables seedlings to establish with
little competition.

Illyrian thistle tends not to be grazed by stock because of its dense spines. However, if the weed is grazed, the spines can cause damage, particularly around the mouths and eyes of animals.

This weed is known to form hybrids with other Onopordum species which may be more invasive and problematic in agricultural systems.

Dense patches can pose a barrier to humans and animals and possibly impact some recreational activities.

Changes in land use practices and spread prevention may also support Illyrian thistle management after implementing the prescribed measures.