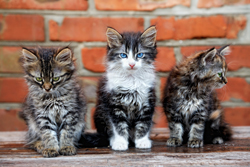 The cat overpopulation problem is due to a number of factors, such as supply exceeding demand and the ability of cats to breed extremely quickly. Research has also found that a major contributing factor to this problem is people feeding unowned cats but not taking full ownership or responsibility for them.

A survey by Monash University found that 22% of people said they fed a cat that didn't belong to them.

People feed unowned cats because they genuinely care about them and feel sorry for them. However many people don't realise that they are causing a bigger problem by feeding, but not owning (desexing and identifying) these cats.

Feeding unowned cats helps keep them alive and strong enough to reproduce. They keep breeding more and more kittens into a life of disease and neglect. This contributes to the tragic cat overpopulation problem in Australia.

If you want to help you must either:

Feeding unowned cats, while compassionate, does not help to reduce the stray cat population or address the welfare risks these cats face.

Feral cats threaten the survival of over 100 native species in Australia. They have caused the extinction of some ground-dwelling birds and small to medium-sized mammals.

They are a major cause of decline for many land-based endangered animals such as the:

Many native animals are struggling to survive so reducing the number killed by this introduced predator will allow their populations to grow.

The predation by feral cats is listed as a key threatening process under Australia's national environment law, the Environment Protection and Biodiversity Conservation Act 1999 (EPBC Act).

Under the Victorian Wildlife Act 1975, it is an offence for cats to attack wildlife and may be seized or destroyed by authorised officers.