Epidemiology of an outbreak — Group A rotavirus in Victorian racing pigeons

There have been a number of confirmed cases of rotavirus infection in pigeons since May 2016.

Rotaviruses cause acute gastroenteritis across a range of species, including humans, mammals and birds.

A novel Group A rotavirus, first identified clinically in racing, feral and fancy pigeons in Western Australia in May 2016, had spread throughout Australia by March 2017. Anecdotal evidence, including social media reports, indicate that up to 100 lofts per state may have been infected. 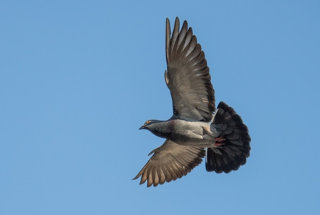 The true total number of infected pigeons in Australia remains unknown, but is estimated to have reached up to 100,000 cases, with several thousand deaths (Walker C, pers comm).

In December 2016, the index case of rotavirus in Victorian racing pigeons was confirmed at a regional bird sale, with rapid spread to Melbourne. According to laboratory records to June 2018, seventeen fanciers, predominantly located in peri-urban Melbourne, owned infected racing pigeons.

A survey was sent to approximately 400 Victorian pigeon fanciers in March 2017, with eight of 85 respondents (9.4 per cent) identified with a confirmed rotavirus infection in their loft(s). In these lofts, a total of 281 pigeons were observed with clinical signs, with approximately 75 per cent of affected birds recovering.

There is evidence that these 'carrier' birds may continue to inconsistently shed low levels of rotavirus post-recovery for up to 10 weeks. A mean of 30 hours was recorded from the onset of typical clinical signs of rotavirus until death (range: 12 hours to 48 hours).

No other birds (for example, chickens) were observed with clinical signs or diagnosed with a rotavirus infection on affected properties. Within the racing pigeon industry there are consistent opportunities for contact between pigeons within a loft and between pigeons from different lofts. Pigeons from a home loft will contact birds from other lofts in trailers prior to tosses and races, as well as during training around the home loft. It was found that rotavirus was primarily transmitted beyond the Victorian index case through the movement of live birds into a loft, either deliberately through bird purchase or inadvertently through the entry of pigeons from neighbouring lofts.

As pigeon racing inherently requires consistent contact between birds from different lofts, vaccination is recommended as a primary method of rotavirus control in this unique industry. A subunit vaccine has been developed, with early trials indicating the production of protective levels of immunity in live pigeons.

Those interested in the vaccine release date are referred to the Melbourne Bird Vet.