As knackery and rendering services have declined in many parts of Victoria in recent years, the question of what to do with dead stock has become increasingly problematic for some farmers.

In some circumstances, farmers have been known to leave their animals in the ‘back paddock’ or even dump them in waterways. Dumping of farm animals in this manner is a biosecurity and environmental hazard – it is also illegal, and EPA Victoria has regulated non-compliant activities in the past.

Composting of dead farm animals is a relatively simple and effective process for the routine disposal of dead stock of all sizes (from poultry to mature cattle), but there are some risks that need to be managed.

Some farmers have been composting for a long time. The resulting compost can be applied to cultivated land, as top dressing on pastures, or on non-grazed farm areas such as shelterbelts.

Compost is a soil conditioner that is able to improve a range of different soil properties, such as organic matter content, and provide slow release nutrients.

Where the cause of livestock illness or death is unknown or animals present with unusual disease symptoms, these cases should be investigated by a veterinarian to determine the cause and to exclude an emergency disease.

Suspicion of a notifiable disease including emergency diseases must be reported to an Agriculture Victoria Inspector of Livestock or a registered veterinarian. This can be through the all-hours Emergency Animal Disease Watch Hotline 1800 675 888.

If there is a suspicion that the animal may have died from an emergency disease, such as anthrax, the carcass must not be composted but disposed of under the direction of the Agriculture Victoria. If in doubt, a veterinarian should be contacted.

Note: Compost material resulting from animal carcasses is classified as ‘restricted animal material’ (RAM). Under the ruminant feed ban, it is illegal to feed RAM to ruminants or allow ruminants access to a stockpile of material containing RAM. Where compost containing RAM is spread as fertiliser on a pasture paddock used for grazing ruminant animals, the livestock should be kept out of the paddock until there has been sufficient pasture growth to absorb the compost. In good growing conditions, this grazing with-holding period is 21 days. A longer grazing with-holding period is required under slow pasture growing conditions or where the quantity of compost used is more than 15 cubic metres per hectare.

What is mortality composting?

Mortality composting is generally conducted in three stages. In the first stage of composting, the pile is left undisturbed as soft tissue decomposes and bones partially soften. The compost is usually then moved, turned or mixed to begin the second stage, during which time the remaining materials (mainly bones) break down further.

Following completion of the second stage, the composting process is completed during a curing or storage phase.

The first (and sometimes second) stage of composting is characterised by high temperatures (>55°C); these conditions result in the elimination of nuisance odours and destruction of pathogens (disease-causing organisms) and weed seeds.

Additional requirements include the following: 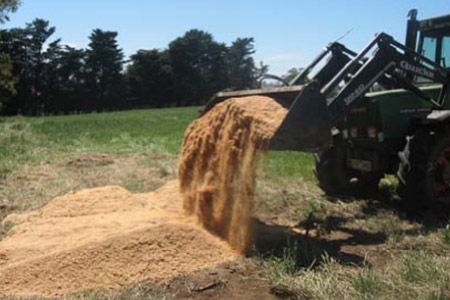 How is composting done?

The instructions in this note is for composting cattle using the open pile method, which is likely to be the method of choice for most farmers. Follow this process for constructing a mortality composting pile: Although the composting process is complete, large bones of adult cattle such as the skull, the spine, shoulder blades or leg bones may still be present. However, they are usually ‘clean’ (free of soft tissue) and have become brittle, starting to disintegrate (Figure 5). Composting is known to control nearly all pathogens - viruses, bacteria, fungi, protozoa (including cysts) and helminth ova to acceptably low levels.  Exceptions to this are some spore-forming bacteria (such as Bacillus anthracis, the bacterium causing anthrax) and prions that cause Bovine Spongiform Encephalopathy (BSE, which is exotic to Australia).  Prions (abnormal form of a normally harmless protein found in the brain) are highly resistant to both physical and chemical means of inactivating pathogens and for this reason it is assumed that composting will be ineffective in reducing infectivity of prion-infected carcasses.

Pathogens are killed during composting by multiple means, such as high temperatures, the direct and indirect effects of other microorganisms and the presence of organic acids and ammonia in the compost. Not only is temperature considered to be the most important factor in killing pathogens, it is also relatively easy to measure during composting.

The heat required for the inactivation of pathogens is a function of both temperature and length (time) of exposure. Exposure to an average temperature during composting of 55 to 60°C for a couple of days is usually sufficient to kill the vast majority of pathogens.

To achieve efficient pathogen kill, all materials in a compost pile must be exposed to high temperatures for prolonged periods. In piles, there is great variation in the temperature profile from the cool outside layers to the hot central mass (Figure 7).  As a result, piles are usually turned periodically to expose the outer layers of the pile to high temperature composting. In mortality composting, piles are turned after the soft tissue has decomposed (stage 2). 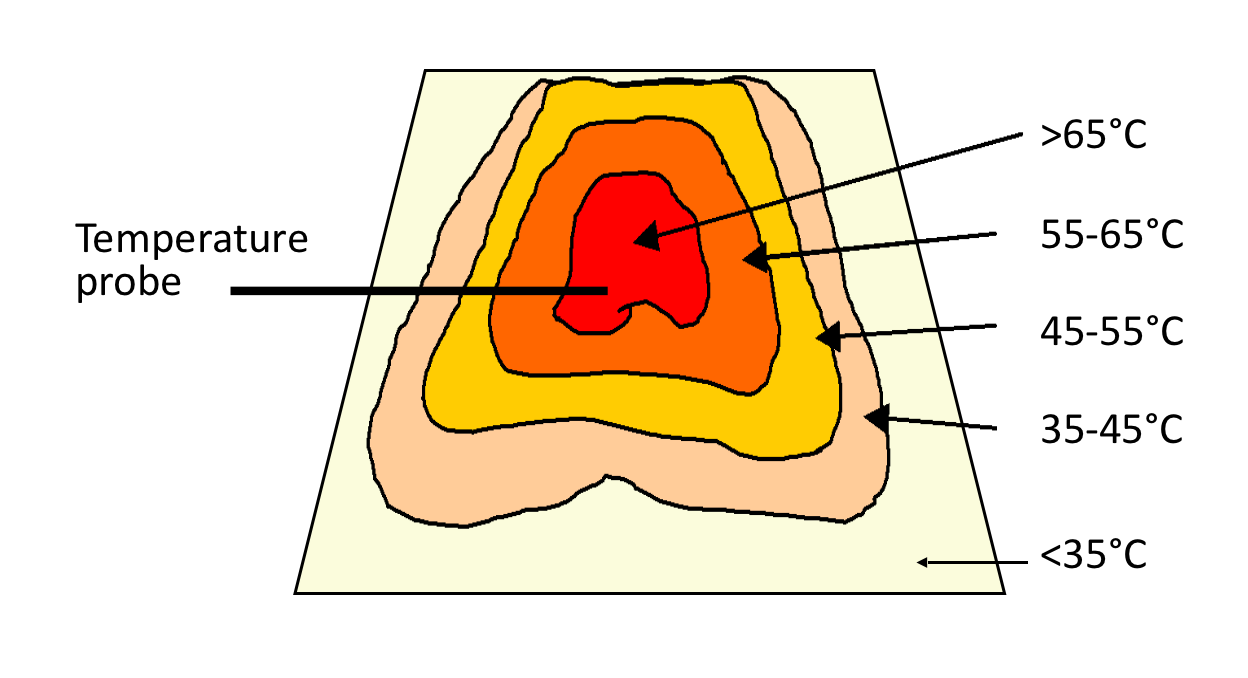 The current state of knowledge suggests that taking the following factors into consideration will reduce the potential biosecurity and fire risks associated with mortality composting:

A compost pile contains living microorganisms including moulds, bacteria, fungi and protozoa. These microorganisms can cause adverse reactions, particularly in people with a weakened immune system, asthma or a punctured ear-drum, or those taking certain prescription medications. Dust particles or bioaerosols released from the pile during handling of the compost on rare occasions may cause skin irritations, eye infection or respiratory illness.

The following precautions should always be followed when handling dead stock or compost materials:

This Technical Note replaces the Factsheet ‘On-farm Composting of Dairy Cattle Mortalities’ produced in 2007 by Dr Kevin Wilkinson, formally of the Victorian Department of Primary Industries and Johannes Biala, The Organic Force, Queensland.

Dairying for Tomorrow and the Australian Government Department of Agriculture, Fisheries and Forestry’s National Landcare Program are acknowledged for their contribution to the original Technical Note.

This Technical Note has been updated through Victorian State Government funding by Agriculture Victoria Dairy Services and Chief Veterinary Unit staff in consultation with EPA Victoria and the United Dairyfarmers of Victoria.

Detailed instructions for mortality composting available on the Dairying for Tomorrow website.

Further information is available from local offices of the department, the Agriculture Victoria website or from the Customer Service Centre on 136 186.

Other articles on composting: