Photos and accurate descriptions of where and when the animal(s) was sighted are critical when making a report. Detailed information allows the Victorian government to make a timely and positive identification. All reports are responded to as a priority and may result in trapping, surveillance and the removal of confirmed boa constrictor.

You should never attempt to approach or handle a snake. All snakes should be considered venomous and highly dangerous. If bitten by a snake dial 000 immediately.

The boa constrictor is not native to Australia and if given the opportunity could populate a wide range of landscapes within Victoria, impacting on native species through predation and potentially introducing new animal disease.

Boa constrictor are classified as a controlled pest animal under the Victorian Catchment and Land Protection Act 1994. The importation, keeping, breeding and trading of this species, without appropriate permits, is illegal and penalties apply.

Boa constrictors have been found in all states in Australia, including Victoria and are typically escapees or deliberately released animals from the illegal pet trade. Boa constrictors are occasionally detected in urban areas of Melbourne and Geelong such as the one found in Seaford in May 2015. The illegal keeping and trading of boa constrictors poses one of the greatest risks of the species establishing in Victoria. Escapees or deliberately released animals can be extremely difficult and costly to recover.

How to identify a boa constrictor

Boa constrictors are one of the world's largest snakes, the average size is 3m but they can reach up to 5m and weigh 45kg though more commonly weigh 10 to 15 kgs. 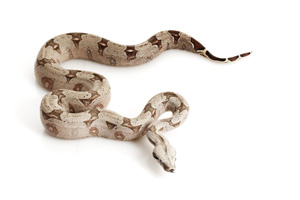 They have a wide range of colour variation. They can be tan, green, red and yellow. They can also have reddish colouration on the tail and elsewhere on the body. The body generally has a distinctive pattern of jagged lines, dark saddles, ovals, diamonds and circles and most have a mid-dorsal head-stripe. They can be found in tropical rainforests to arid semi-desert country. However, they prefer to live in rainforest due to the humidity and temperature, natural cover from predators and vast amount of potential prey.

They are also commonly found in or along rivers and streams, as they are very capable swimmers but prefer to stay on dry land. They live primarily in hollow logs and abandoned mammal burrows where they can hide from potential predators.

As their name suggests, boa constrictors constrict their prey. This involves the snake tightly coiling around the prey, not crushing it, but severely restricting movement. They prey on birds, mammals and other reptiles and generally hunt at night.

They are solitary animals and are unlikely to make long distance movements provided food and shelter are locally available.

They give birth to fully formed live young.

Australian native snakes do not look similar to Boa constrictors.

Boa constrictors have the potential to be a pest as they: