Photos and accurate descriptions of where and when the animal(s) was sighted are critical when making a report. Detailed information allows the Victorian Government to make a timely and positive identification. All reports are responded to as a priority and may result in trapping, surveillance and the removal of confirmed Red-eared slider turtle.

The red-eared slider turtle is not native to Australia. It is a very adaptable and opportunistic invasive animal that has the ability to populate a wide range of fresh water ecosystems. They compete with native turtles for:

Red-eared slider turtle are classified as a controlled pest animal under the Victorian Catchment and Land Protection Act 1994. The importation, keeping, breeding and trading of this species, without appropriate permits, is illegal and penalties apply.

Red-eared slider turtles have been found in the wild in Victoria. They have been removed from Elsternwick Park Lake, the Yarra River and from several locations in urban streets of Melbourne. The department has also conducted a trapping program in the Moorabool River at Fyansford to help prevent breeding of a confirmed animal in this location.

How to identify a Red-eared slider turtle

The red-eared slider turtle is a medium-sized fresh water turtle with an adult carapace (shell) length of 12.5 to 28 cm. The carapace (shell) is dark green in colour with sometimes yellow and black markings as circular blotches. The plastron (underside) is bright yellow with black rings, blotches and swirls marking each of the 12 segments.

Red-eared slider turtles in the wild will often have a thick layer of algae covering their shell whereas escapees from captivity are often clean and brightly coloured. They have a broad red or orange stripe behind each eye with narrow yellow stripes marking the rest of the black body, neck, legs and tail.

Their shell is dome-shaped, likened to the shape of a helmet. 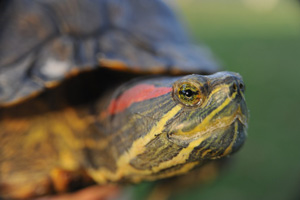 They have distinctive long claws on their front and hind legs. The claws are longer and more prominent in males than females. They retract their head straight back into their shell when threatened. Native turtles tuck their neck to one side underneath the shell.

They are almost entirely aquatic, but as they are cold-blooded, they leave the water to sunbathe (also referred to as basking) to regulate their temperature. At night they rest on the bottom beneath the water or float at the surface. They are less active over the winter months.

If still in doubt, email photographs to highrisk.invasiveanimals@agriculture.vic.gov.au or contact our Customer Service Centre on 136 186, with details of the animal and a member of staff will contact you.

The red-eared slider turtle have several attributes that give them a competitive advantage over native species such as:

They can also carry exotic diseases and parasites which can be transmitted to native wildlife.