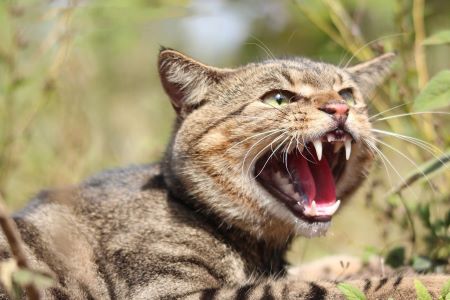 Cats (feral or wild) are a declared established pest species on specified Crown land in Victoria under the Catchment and Land Protection Act 1994 (CALP Act). This declaration came into effect on 26 July 2018.

Cats may have arrived in Australia as early at the 17th century, though it is believed that European settlers brought them out as pets during the late 18th century. Cats were also deliberately released into the wild during the 19th century to control rabbits and mice. Today, feral cats exist over much of Australia and have successfully colonised most habitats. Distribution and population density in Victoria

It is difficult to accurately estimate feral cat populations due to their cryptic behavioural patterns and the changing environmental conditions. When prey is abundant, cat populations may increase rapidly, but when food becomes scarce, they typically decrease. Feral cats usually reach their highest densities on small islands or in human-modified habitats, such as farms and rubbish tips as resources are often abundant in these environments. Feral cats have been shown to move into areas burned by bushfires, where surviving native species are at greater risk of predation through a reduction in sheltering understorey vegetation.

In appearance, Feral cats can be difficult to distinguish from domestic cats. They have agile bodies, acute senses and fine coordination that is well suited for hunting. The most common coat colour of feral cats in Australia is striped tabby, but blotched tabby and black are also common. Other colour variants such as ginger or grey, are also seen in feral cats.

Long hair is uncommon in feral cats. Exotic breeds of cat, such as Persian or Siamese, are not found in feral populations.

Some deliberately bred characteristics of domestic cat breeds, such as very long coats or flat faces, are not common in feral cats. Readily distinguished breeds of domestic cat, such as Persian or Siamese, are not found in feral populations.

Feral cats are mostly solitary and although they may be active at any time, they are usually more active at night. Their two greatest periods of activity occur around sunrise and sunset. During the day, feral cats tend to lay up in sheltered areas, including rabbit burrows, hollow logs, or dense thickets of scrub. In Victoria, feral cat home ranges can vary between <1 km2 and 10km2 if food resources are scarce with males typically having larger home ranges than females.

In rural and bushland environments, feral cats are generally found in low numbers with relatively large home ranges. Where food is more abundant, such as peri-urban areas, feral cat numbers tend to be higher with smaller home ranges.

Feral cats are opportunistic predators that eat a wide range of wildlife species. They often hunt and kill the most available prey species, but it has been reported certain individuals can become specialist hunters that target specific prey. Feral cats live in a diverse range of habitats including deserts, forests, coastlines, woodlands and grasslands.

Feral cats can carry the same parasites and viruses that affect domestic cats, such as roundworms, tapeworms and feline enteritis, feline leucopaenia and cat flu. Cats are the primary host for some parasites and bacteria that can infect people, wildlife and livestock, including Toxoplasma gondii and Sarcocytis and the bacterium that causes cat scratch disease. Feral cat populations contribute to the maintenance and spread of diseases caused by these agents, particularly through excretion of parasite eggs in their faeces.

Feral cat populations are self-sustaining, with reproductive success driven by resource (food) abundance. On average, females have two litters per year with the first in spring and the second in late summer/ early autumn. However, litters can be born in any month with litter sizes ranging from 2 to 7.

Kittens and juvenile feral cats may be prey for foxes, wild dogs/dingoes, reptiles and wedge-tailed eagles, and there is a high natural mortality rate for kittens. Under favourable conditions, feral cat offspring remain with the mother until approximately 7 months of age. After this time, they will gradually leave the family group. Dispersing individuals tend to live a more solitary existence.

Feral cats may live for up to 7 years.

Impact on ecosystems and biodiversity

Feral cats directly affect native species through predation, disease transmission and resource competition. They may also increase the impacts of other threats to biodiversity, such as bushfire and land clearing.

Feral cats are implicated in the extinction of 25 native, small and medium-sized mammal species and further threaten the survival of over 100 other native species in Australia.

It is difficult to place a dollar value on the environmental impacts of feral cats. Estimates of the annual predation impact by feral cats on Australian native wildlife suggest 272 million birds, 470 million reptiles, 815 million mammals are killed, with unquantified losses of invertebrates and amphibians. There are five pathogens in Australia with known impacts on human health or livestock production, for which cats are the primary host. The most significant of these is Toxoplasma gondii, a protozoan parasite that reproduces in cats but can be passed to humans and livestock via cat faeces. Infection with T. gondii can lead to significant health effects in people and is a major contributor to spontaneous abortion in sheep and goats. Estimates of the overall cost of cat-dependent (including both feral and domestic cats) diseases in Australia range from AU$7.67–18.3 million in livestock production losses (from toxoplasmosis and sarcocystosis), and a potential range of AU$2.11–10.7 billion annually in negative effects on human health (from toxoplasmosis and cat scratch disease).

Read more about the Humane cage trapping of cats.

Read more about the Leg-hold trapping of declared feral cats.

Read more about the PAPP bait for feral cat control.

Feral cats are not declared an established pest on private land in Victoria, meaning farmers and other private landholders are not required to control feral cat populations on their land. Private landholders can manage cats roaming on their land in accordance with current laws. In essence, on private land, cage trapping as per these procedures is the only control option for cats (feral or otherwise). This is because it is not straightforward to determine if a cat is feral or un/owned without scanning for a microchip. Therefore, any cats trapped on private land must be handed to the local Council so they can be scanned. If a private landowner destroys a cat on their land, they risk liability if the cat was an owned cat that was roaming.