Photos and accurate descriptions of where and when the animal(s) was sighted are critical when making a report. Detailed information allows the Victorian Government to make a timely and positive identification. All reports are responded to as a priority and may result in trapping, surveillance and the removal of confirmed smooth newt.

Smooth newts are not native to Australia and pose a risk to native species if they were to establish and breed. They have the potential to carry disease and predate on small native species.

Smooth newt are classified as a prohibited pest animal under the Victorian Catchment and Land Protection Act 1994. The importation, keeping, breeding and trading of this species, without appropriate permits, is illegal and penalties apply.

The illegal keeping and trading of smooth newts poses one of the greatest risks of the species establishing in Victoria. This is the most likely source of a small, localised population of smooth newts identified in 2011, in Melbourne's south-eastern suburbs. Removal of escaped or deliberately released smooth newts from aquatic environments is expected to be extremely difficult and costly. For this reason, successful eradication of a population from the wild is extremely unlikely.

How to identify a smooth newt

Smooth newt are a lizard-like animal that can grow up to 10 cm in length. 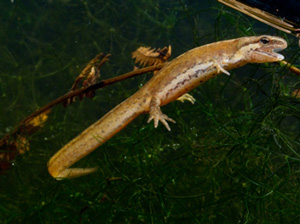 They are pale brown to olive green in colour and have an orange-coloured belly with dark spots. 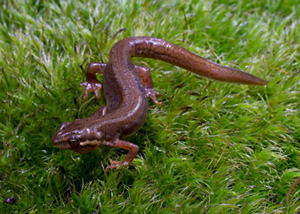 They have an elongated, paddle-like tail that aids in swimming. During breeding season (spring to early summer) the males develop a transparent crest along the spine which extends to the end of their tail. They prefer still and shallow water of variable size and quality for breeding with plenty of aquatic vegetation, either permanent or short-lived water bodies are suitable. Terrestrial hiding sites can include under logs, rocks and leaf litter.

Smooth newts have a semi-aquatic lifestyle. During breeding periods (July to December in Victoria) they live in aquatic habitats, from sea-level up to 2400 m in altitude. Outside of breeding periods they retreat from water and live a cryptic lifestyle in the surrounding habitat.

They are generally nocturnal, but during breeding season are active both day and night, outside this period they restrict activity to rainy or humid nights.

Potential impacts could arise from predation, competition and disease spread.