Photos and accurate descriptions of where and when the animal(s) was sighted are critical when making a report. Detailed information allows the Victorian government to make a timely and positive identification. All reports are responded to as a priority and may result in trapping, surveillance and the removal of confirmed cane toad.

Since their release in 1935, cane toads have expanded their range throughout northern Australia. They are now located in Queensland, Northern Territory, New South Wales and north-western parts of Western Australia.

Cane toads pose an extreme threat to Victoria's native species. They compete for food, may carry new diseases and pathogens, poison with their toxic glands and can rapidly expand and colonise new areas.

Cane toad are classified as a controlled pest animal under the Victorian Catchment and Land Protection Act 1994. The importation, keeping, breeding and trading of this species, without appropriate permits, is illegal and penalties apply.

The cane toad is not known to occur in the wild in Victoria. They have been reported and confirmed in Victoria with an average of 3 to 8 cane toads being detected per year. They are almost always stowaways accidentally transported on vehicles, camping gear, caravans and in the luggage of returning travellers from northern Australia or via commercial goods such as potted plants imported for the plant nursery trade.

How to identify a cane toad 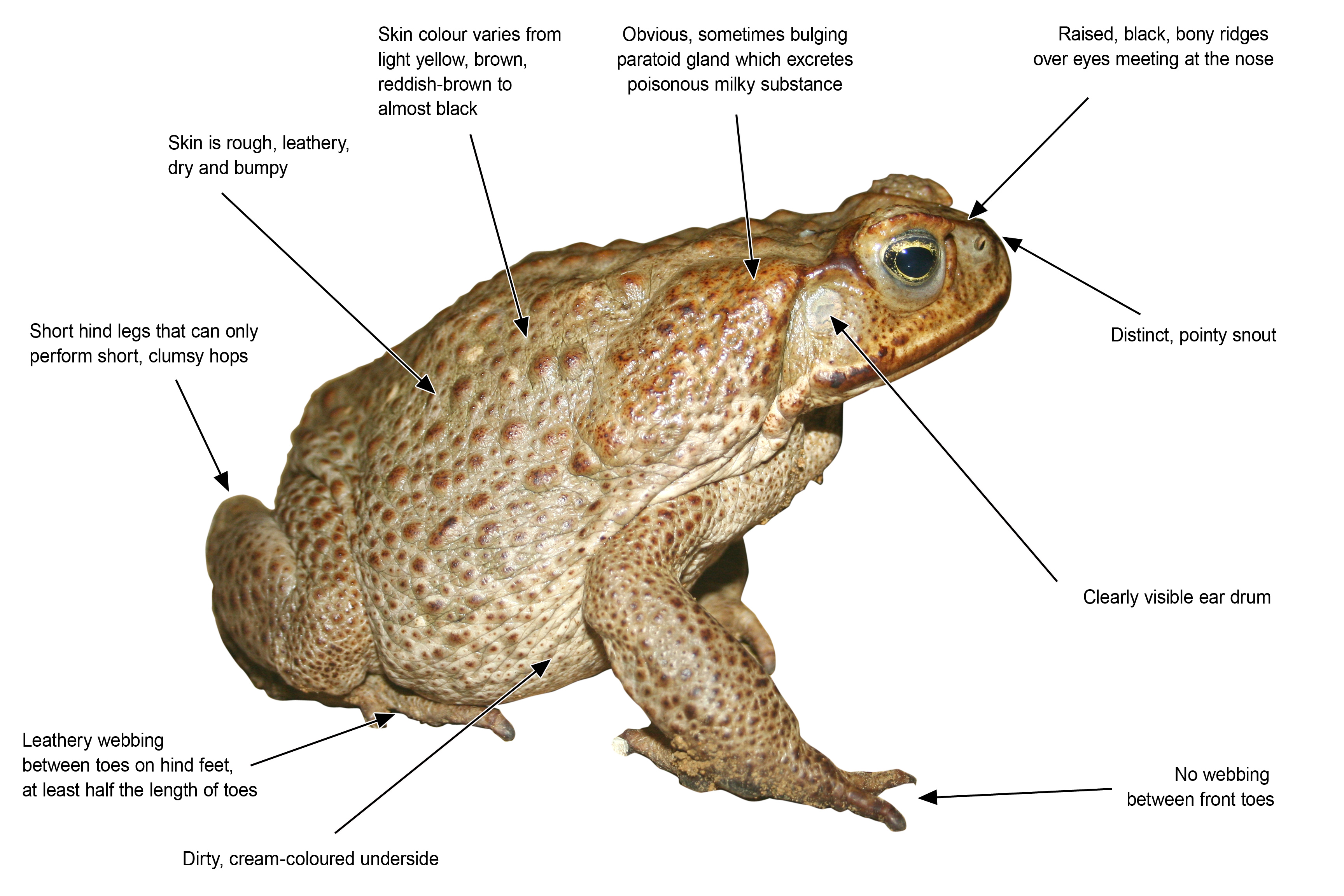 Adult cane toads are approximately 10 to 15cm in length. 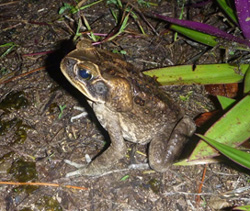 The back of a cane toad ranges from light yellow, brown, reddish brown to almost black in colour. The underside of an adult toad is usually a dirty cream colour, whilst a juvenile has a grey and cream marbled pattern that is lost with age. 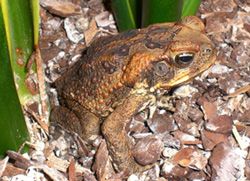 Cane toads have a pointy snout with a prominent, bony ridge above the eyes and a visible ear drum.

Their skin is dry, hard and leathery with raised warty lumps.

They have a distinct poisonous sack (parotid gland) on each shoulder which excretes a white milky substance when threatened.

They sit relatively upright and have short clumsy hops. 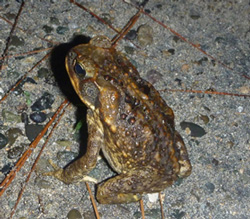 Cane toads can tolerate a broad range of environmental and climatic conditions and appear to adjust and survive in most habitat systems.

They are nocturnal, becoming active in large open areas, such as on roads and lawns. They can be found congregating beneath street lamps and other lights to catch insects. Often they are found sheltering under rocks and logs, in depressions and under vegetation during cold or hot weather.

They are ground-dwelling and bound short distances but do not leap and are not capable of climbing smooth surfaces.

They need constant access to moisture to survive. Instead of drinking, they absorb water through the skin on their belly — from dew, moist sand or any other moist material.

Sounds like a guttural trill and is sustained for about 30 seconds.

Exotic toads such as the cane toad are often confused with native frog species and many people have difficulty telling them apart.

In Victoria, many of the exotic toad reports that are received are actually the native Eastern banjo frog, also known as the pobblebonk (Limnodynastes dumerilii).

Before making a report of an exotic toad, use the information in native frog or exotic toad to check the features of the specimen you have sighted and compare the identification characteristics that set native frogs apart from exotic toads.

If still in doubt, email photographs to highrisk.invasiveanimals@agriculture.vic.gov.au, or contact the Customer Service Centre on 136 186 with details of the animal and a member of staff will contact you.

When threatened or handled roughly cane toads excrete a toxic milky substance from enlarged paratoid glands on their shoulders. The venom produced by these glands acts on the heart causing cardiac arrest in most animals. In Australia, native animals affected by cane toads include:

All of these species are vulnerable to the toxic poison produced by cane toads.