Foxes are an established pest animal in the state of Victoria. 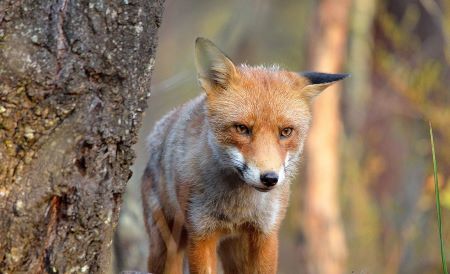 Foxes were introduced into Australia, for sporting purposes, in 1855 with most releases being around Melbourne.

Only 20 years after their introduction, foxes had been declared as a pest species in the state of Victoria. Within 100 years, foxes had reached their current distribution on the Australian mainland. Today foxes occur over 75% of Australia and their distribution is strongly linked with that of rabbits.

Foxes are found in all mainland states and territories. They have also been reported to occur in Tasmania.

In Victoria, foxes are found in a range of environments including urban areas, alpine heaths, rainforests, coasts and the Mallee. Victorian habitats are highly favourable for foxes.

Fox densities are often higher in urban areas than they are in rural areas due to the abundance of food, water and shelter. In Melbourne, there are as many as 16 foxes per km2, while in temperate agricultural areas their densities are estimated to be around 4–8 per km2. 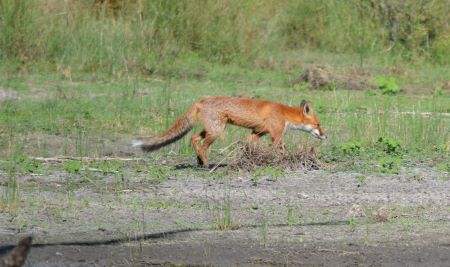 There are 21 different species of fox found throughout the world, but only red foxes occur in Australia.

Red foxes have big ears, a bushy tail, and variable coat colours and patterns. They are usually reddish-brown above with a whitish/grey chin, chest and belly. They commonly have a distinct white tip on their tail, but sometimes it may be black or dark red. Foxes have a narrow chest, long legs and have long, high-set, moveable claws which remain sharp and make foxes excellent climbers and burrowers.

While their size often varies, males typically weigh 4 to 8 kilograms and females 4 to 6 kilograms. 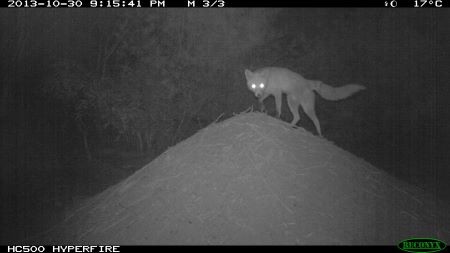 Foxes will travel beyond their home range to congregate where seasonal food is abundant, such as lambing flocks or migratory bird breeding colonies.

Foxes may travel up to 10 to 15km per night but often rest in hides during the day. These hides include hollow logs or trees, enlarged rabbit burrows or dense undergrowth. Foxes may use several hides and do not necessarily return to the same site each day.

Fox social behaviour is limited to the rearing of cubs, with a strong social structure being developed during the breeding season. These social groups typically consist of a dominant adult male (dog) and a dominant adult female (vixen), together with several subordinate vixens which are usually related. Usually, the dominant female produces a litter of cubs, and the subordinate females help rear them.

Foxes also cache (bury) food for later consumption, which is a basic survival strategy. Caching usually involves placing the food in a small hole and covering it with soil or debris.

During lean times, when bad weather or injuries result in poor hunting success, foxes rely on these caches for survival. Adult foxes and cubs will defend cached food and will move food to another location if disturbed by other foxes.

Foxes also exhibit surplus killing behaviour where they will kill more prey than they need for their immediate requirements.

Foxes have long, sharp teeth and very quick reflexes, and kill by inflicting multiple bites around the head and neck. Birds such as poultry may only have the head and neck eaten, large feathers are chewed off rather than plucked out. Relatively large prey such as lambs typically have their tail, ears and tongues eaten and often the chest cavity is opened to eat internal organs. If the skin around the neck is cut back many small holes may be evident as a result of fox kill. Lambs and calves sometimes have their tongues eaten by foxes and sheep or cows can have teats or vulvas chewed off. Foxes are highly opportunistic omnivores that eat a variety of meat, insects and plant materials.

Where present, rabbits make up a bulk of fox diet. Other common food items include:

Primary predation by foxes on domestic livestock is common and those most susceptible include:

There have also been isolated instances of the predation of calves from difficult birthing.

A large portion of the fox's diet often consists of introduced and native animals. Foxes mostly prey upon animals weighing between 35 to 5500 grams (sometimes referred to as critical-weight-range species). Fox populations are established in urban, suburban, agricultural and natural environments throughout Victoria. Foxes are often seen in urban areas, especially where there is cover provided by parklands and reserves, and food is easy to find.

Outside urban areas, foxes are probably most abundant in fragmented agricultural landscapes that provide a range of habitats, food and cover.

Foxes have few natural predators in Australia, with most mortality occurring because of human intervention or drought. Fox cubs are vulnerable to birds of prey and dogs.

Foxes are susceptible to the same diseases as dogs which are transmissible between these animals. Mange and distemper are thought to be important causes of mortality in wild fox populations, but little is known about their role in regulating Australian fox populations.

The fox is a carrier of rabies (where present) and could be a major vector for the spread of the disease if introduced to Australia. 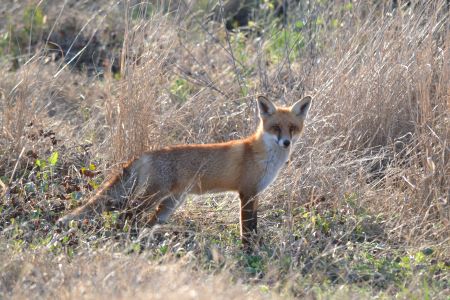 Foxes exhibit both monogamy and polygamy. Polygamy occurs where males mate with more than one female in the same range, and where male monopolise the ranges of two vixens.

Vixens mate once a year and will accept males over a three-day period. Breeding is triggered by by changing day length and food availability. Male foxes are infertile from September to March due to the absence of sperm in the testes during this period. Within Australian fox populations, mating typically occurs over a 3-to-7-week period from mid-June to the end of July.

Fox litters vary from three to five cubs. Pregnancy lasts for 51 to 53 days, and cubs are born in dens early August to late September.

Cubs eat regurgitated meat at around 3 weeks and partly digested whole food items are consumed around 4 weeks of age. Vixens cease lactating and wean cubs at 5 to 8 weeks.

Cubs emerge from the den at around 6 weeks of age, and by 8 to 10 weeks they abandon the den and live on the surface.

At 3 months cubs hunt for small animals and gradually gain independence by January or February.

Although they may stay in their family groups, juvenile foxes become completely independent by March.

Dispersal from the natal area occurs from March onwards when juvenile foxes are 6 to 9 months old.

Young foxes are sexually mature by 9 to 10 months, with 85 per cent of young females breeding in the first year.

Young foxes disperse from their family unit around the beginning of autumn, which can result in a large floating population of young foxes looking for a place to live. Since the mortality of adult foxes is considerably high (50 to 60 per cent), there is a rapid and considerable change in territory occupancy from one year to another.

Males are more likely to leave the parent's territory than females and to travel greater distances, with males moving on average about 68km and females about 14km. It is believed that the dog fox acts more aggressively towards his male offspring, eventually chasing them off his territory. In many instances the young female foxes do not move far to a new territory, and some will remain in the parent's territory to help them raise next year's litter. 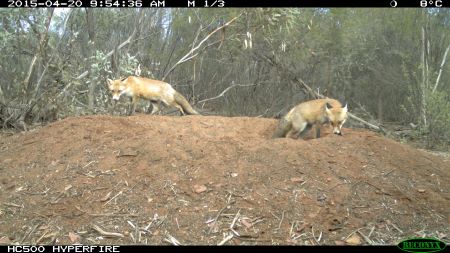 In Australia, the impact of foxes combined with habitat degradation is the most likely cause of 'at risk' native animal declines.

Foxes are also considered to be a threat to at least 14 species of birds, 48 mammals, 12 reptiles and two amphibians. Listed as critically endangered are the:

Foxes are thought to have played a major part in the demise and extinction of many ground-dwelling native species in the last 130 years.

Almost any animal up to 5.5 kilograms in weight is at risk from foxes. A single fox is estimated to eat about 400 grams of food each night. Over a year, this equates to around 150 kilograms of food. As foxes may kill many animals in a night, yet only consume a small amount of each, this could amount to thousands of mammals, reptiles, birds and insects killed each year by a single fox.

The scats of foxes contain the remnants of fruit and berries from native and introduced species. Introduced plant species found in fox scats include:

Foxes disperse weed seeds in their dung. A seed takes 4 to 48 hours to pass through a fox's digestive system; they can be distributed over wide distances. It is also likely that seeds are dispersed attached to fox fur. The economic impact of foxes in Australia has been estimated at around $227.5 million per annum. This includes: $17.5 million in sheep production losses $190 million in environmental impacts $16 million in management costs $4 million in research costs. These production losses are rather conservative in today's environment where lamb retail prices are higher. Primary fox predation may result in 4 to 30 per cent of lamb loss but their impact on agricultural production remains unquantified

Total economic impact must also take into account the loss of potential genetic gain, the redirection of resources away from farm activities to control effort and reduced land values.

If rabies were to enter Australia the impacts would be devastating for native animals and domestic livestock. Rabies mostly affects members of the dog family, but can also be passed on to humans, livestock and native animals and foxes are known to be a major vector of the rabies in many parts of the world.

Impact on social value and health

Foxes cause significant distress and hardship when they kill livestock such as poultry and lambs. Foxes also carry diseases that are transmissible to domestic dogs and humans such as: Urban foxes are a nuisance pest with behaviour including:

Foxes may also prey on native and domesticated animals including:

They can spread parasites and diseases such as mange and distemper to domestic animals and pets.

Control measures used for foxes include:

The department recommends an integrated pest management approach that combines the use of all suitable control tools. They should also be implemented in a coordinated manner at a landscape scale.