Photos and accurate descriptions of where and when the animal(s) was sighted are critical when making a report. Detailed information allows the Victorian Government to make a timely and positive identification. All reports are responded to as a priority and may result in trapping, surveillance and the removal of confirmed northern palm squirrel.

The northern palm squirrel is not native to Australia and if given the opportunity could establish and breed in Victoria. They have the potential to be an urban nuisance as elsewhere they have caused damage to urban electrical infrastructure and to ornamental trees.

Northern palm squirrels are classified as a controlled pest animal under the Victorian Catchment and Land Protection Act 1994. The importation, keeping, breeding and trading of this species, without appropriate permits, is illegal and penalties apply.

There are currently no known populations of northern palm squirrel within Victoria however they have been reported in many Australian states including Victoria, where they have historically been detected in the illegal pet trade. The illegal keeping and trading of exotic animals poses one of the greatest risks of new pest animals establishing in Victoria. In the event that these animals escape or are deliberately released they can be extremely difficult and costly to recover.

How to identify a northern palm squirrel

Northern palm squirrels are similar in size to rats, between 22 to 40cm in length (including tail). They weigh between 60 to 200g. Their fur is grey-brown and their belly fur is creamy-white or brownish. They have whitish stripes on their back and a dark bushy tail covered with long black and white hairs. 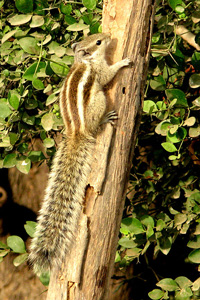 Their ears are small and triangular and their teeth are chisel sharp and grow constantly.

Their natural habitat is in areas that are sub-tropical, warm and arid and includes:

Within Perth they have adapted well to the urban environment and can be found in gardens, parks and schools. They favour palm trees over Eucalyptus trees. In the wild they nest in trees, but in urban areas they can nest in housing.

Northern palm squirrels are active during the day. While not strictly territorial, they sometimes defend their roost and nest sites. Generally they are tree climbing but will forage on the ground at times. They move with rapid darting movements and climb with great agility.

Northern palm squirrels are quite vocal with an alarm call that sounds like 'chip chip chip'.

Australia has a lot of small arboreal mammal species like possums, gliders and especially Brush-tailed Phascogales (Phascogale tapoatafa) that may superficially resemble exotic squirrel species and live in similar habitats. However up close there are no native Australian animals that look similar.

Northern palm squirrels have the potential to become a pest species in Victoria as their diet is broad ranging and thus they have little difficulty in finding food.

Should they become established they may negatively impact on the environment and agriculture. Overseas they're a serious pest of: