European hares are declared as established pest animals in the state of Victoria under the Catchment and Land Protection Act 1994 (CaLP Act).

In Australia, the first wild populations of hares occurred on the shores of Victoria's Westernport Bay in 1862. The following year, another hare colony was established on Phillip Island by the Acclimatisation Society of Victoria for the use in the sport 'coursing'. Coursing is where dogs are used to hunt species including hares by sight rather than smell.

By 1870, European hares were abundant and widespread throughout much of south-east Australia. Spreading at around 60 kilometres per year, hares had crossed the Murray River by 1875 and had made their way along the western slopes and tablelands of New South Wales. By 1900, hares had reached the Queensland border and become a major agricultural problem in northern and western Victoria.

Hares are widespread in open grassland, woodland, agricultural and urban areas throughout Victoria.

The European hare belongs to the family Leporidae, along with rabbits. 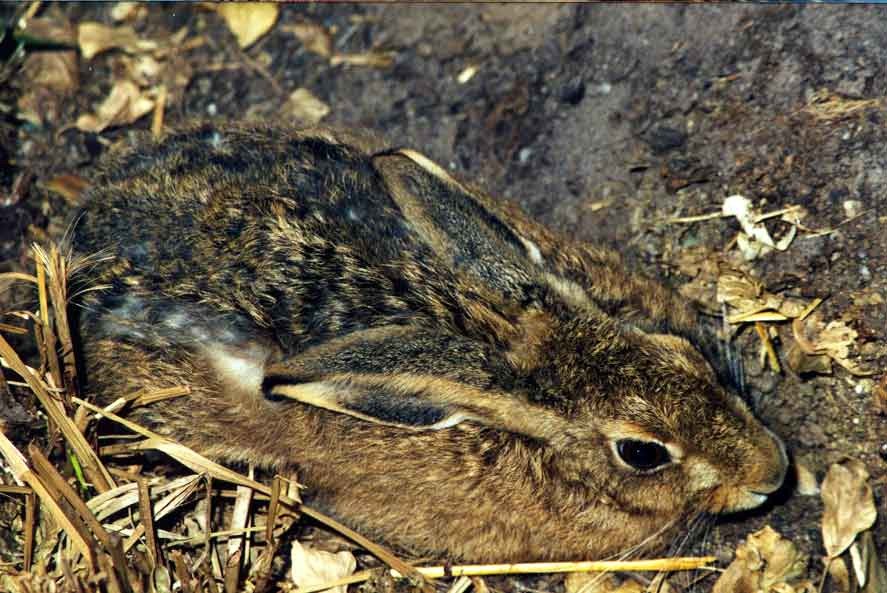 Male hares are generally smaller than females. Leverets are born with hair and their eyes open and can move about soon after birth. Like rabbits, juvenile hares have a white star on their forehead.

Hares have large ears,which play an important part in controlling their body temperature. In hot weather, the ears are held away from their bodies to assist with cooling, while in cooler weather they are held close to their body to prevent heat loss.

A hare's hind limbs are longer than its front limbs. The fur has a flecked appearance, made up of tan, black and white hairs, ruddy brown or grey above and white below. This allows them to blend in well with dry grass.

Like rabbits, hares have 28 teeth with the lower tooth rows being closer together than the upper rows. In the upper jaw, hares have two pairs of continuously growing, enamel covered upper incisors; the front long pair has a cutting edge, while the peg teeth located behind these do not. This double pair of upper teeth is found only in rabbits and hares and cause a very distinctive, 45-degree angle cut on browsed vegetation. At birth, hares have three sets of incisors, but the outer pair is lost soon after.

Hares are most active from late afternoon through until early morning.

Hares are solitary animals but will come together while grazing in response to predation. Hares will travel up to 3 to 4km to feed on a wide range of food types.

Hares can accelerate to high speed when disturbed or threatened. When approached, they will remain still until the predator is within 1 to 2 metres. Then, they will break cover and sprint away from the threat at high speed. Hares can also confuse predators by doubling back on its tracks to leave a disarrayed trail. This may also involve a large leap sideways to break the scent trail.

A hare's heart is big for its size, which allows it to run at a pace that many other animals can't match. However, its heart will not support the animal when they are stressed, panicked or traumatised.

Unlike rabbits, hares do not shelter in warrens or burrows. Instead, they rest in a shallow depression in the ground called a 'form'. Forms are usually found among long grass, rocks, logs or branches, oval in shape and around 400mm × 200mm in dimension. Leverets are born above ground into a type of nest created within a form.

Hares are primarily herbivorous. Their diet consists of leaves, stems and rhizomes of dry and green grasses. They also eat:

Like rabbits, hares also re-ingest faecal material from the caecum (referred to as caecotrophy) to gain the maximum nutrients from their food.

Hares prefer open country with the presence of tussock or rocks to hide amongst. They are widespread in grasslands, woodlands, agriculture and urban areas of Victoria.

Currently, hares are limited to south-eastern Australia's temperate climate which replicates the cool European climate from where they originate.

Hares are vulnerable to predators both as leverets and as adults. Foxes and feral cats will hunt adult hares and leverets, while wedge-tailed eagles are a major threat to adult hares.

Hares are prone to several different parasites and diseases that can cause a higher mortality rates than predators. Hares are also be affected by RHDV2, which is a form of the calicivirus. Importantly, RHDV1 K5 has never been shown to affect any species other than rabbits. Hares can breed all year, but breeding is often triggered by the availability of high protein green vegetation to stimulate breeding. Hares begin to breed at about eight months of age and can mate immediately after giving birth.

Under favourable conditions, hares may produce more than four litters (each of 2 to 5 young) per year. Research has also shown that the more litters hares have, the smaller the litter sizes become.

The average gestation period for hares is 42 days, but it can range from 38 to 46 days. At birth, leverets are fully furred and are about 13 to 17cm in length weighing 80 to 180g. Their eyes are open at birth, and they can move around soon after. Leverets are born into a form and are hidden within dense vegetation.

The mother will visit to suckle the young once every 24 hours. At around three days, the young will disperse from their birthplace and find separate hiding locations. Young from the same litter will return to a central space to suckle.

Hare home ranges are considerably larger than rabbit home rages, with hares being able to travel up to four kilometres per night. This is due to their greater mobility and because they do not rely on a warren system for protection from the weather elements and predators.

European hares can cause significant damage by gnawing the bark of young trees and shrubs. Hares also chew the stems off young trees, which damages or kills the plant. This makes hare particularly problematic at revegetation sites.

European hares are opportunistic feeders that predominantly graze on grasses, but they also consume crops, such as vegetables, lucerne and cereal. This can cause significant economic losses to landowners. Hares can also travel significant distances, so the potential for one animal to cause widespread damage to plants is high. European hares can also be a problem in forestry, ornamental and fruit producing plantations as they often gnaw the bark of young trees and vines leading to ringbarking and death of the plant.

The department recommends integrated pest management using all suitable control measures implemented in a coordinated manner at a landscape scale.

Read more about management and control of European hares.

Figure 1 to 3 courtesy of Phil Stott