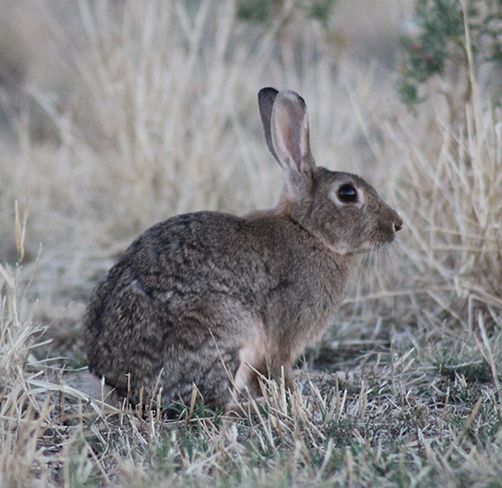 Rabbits are an established pest animal in the state of Victoria.

Various domestic breeds of rabbits were brought to Australian during early European settlement. Some of these were released and some escaped, but none were able to establish wild populations.

That is until 1859, when approximately seven wild rabbits were released at Barwon Park near Geelong. Just seven years after their release, some 14,253 rabbits had been shot on Barwon Park. 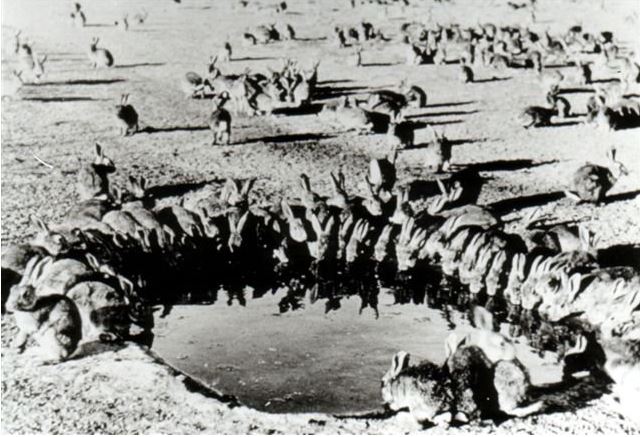 By 1875, rabbits were well established in the western districts of Victoria, around Sydney and at the southern end of the Flinders Ranges in South Australia. By 1879, the South Australian and Victorian infestations had merged to cover an area from Spencer Gulf to north-eastern Victoria.

European rabbits are small mammals that belong to the family Leporidae, which also includes hares.

Rabbits have long hind legs and short front legs. They also have long ears and large, slightly protruding eyes on the sides of the head that give them panoramic vision to detect predators.

Rabbits have unique upper teeth consisting of a pair of gnawing hypsodont teeth (which grow continuously) and a pair of peg teeth that are hidden behind. This double pair of upper teeth are only found in rabbits and hares, and they cause a distinctive 45-degree angle cut on browsed vegetation.

Male rabbits are known as 'bucks', female rabbits are called 'does' and young rabbits are 'kittens'. A rabbit's fur colour is typically grey-brown with a pale belly. Black or ginger rabbits do occur in the wild, though they represent less than 2 per cent of the rabbit population and white rabbits are rarely seen.

Adult rabbits usually weigh between 0.8 to 2.3 kg, while at birth they weigh just 35 g. Juvenile rabbits moult at 3 months of age and frequently have a white star on their forehead, which they lose when they moult.

Rabbits are mostly active from dusk until dawn. Initially, they graze/socialise on or near the warren, but will move further away as it gets darker. Rabbits often stay above ground during the night unless they are disturbed.

Rabbits are wary of new food items and changes to their environment. When threatened, they will crouch down and freeze or try to sneak away. If this fails, they will sprint for the warren or cover, with the white underside of the tail showing as a visual warning to other rabbits. When close to cover, rabbits will respond to threats by thumping the ground with their back legs and vocalising to warn other rabbits. Rabbits form social groups with complicated social structures. Dominant males will typically defend a territory to gain mating rights to females, while dominant females will defend access to nesting sites. At large warrens or where populations are dense, different social groups may share a common warren or feeding area.

The territory or home range of rabbits varies from approximately 0.2 to 2 ha depending on:

Rabbits require a high-quality diet to maintain condition and for reproduction. As such, they are highly selective grazers, with a preference for plants or parts of plants with the highest nutritional content.

Rabbits generally obtain water from green vegetation but will travel to drink if they can't obtain enough water from their diet.

Like hares, caecotrophy (the re-ingestion of faecal material from the caecum) is a behaviour that is used by rabbits to gain the maximum amount of nutrients from their food.

Soils have a strong influence on rabbit density with deep, well-drained soils (sands and light loams) being most productive. Rabbit warrens are also typically larger and more complex in deeper soils.

Rabbits form extensive burrows or warrens for shelter. The warren is the key to the success of rabbits in Australia. It not only provides protection from predators but also protection from environmental extremes. Without protection from the elements, rabbits are not able to breed successfully, as newborns are very susceptible to temperature extremes. 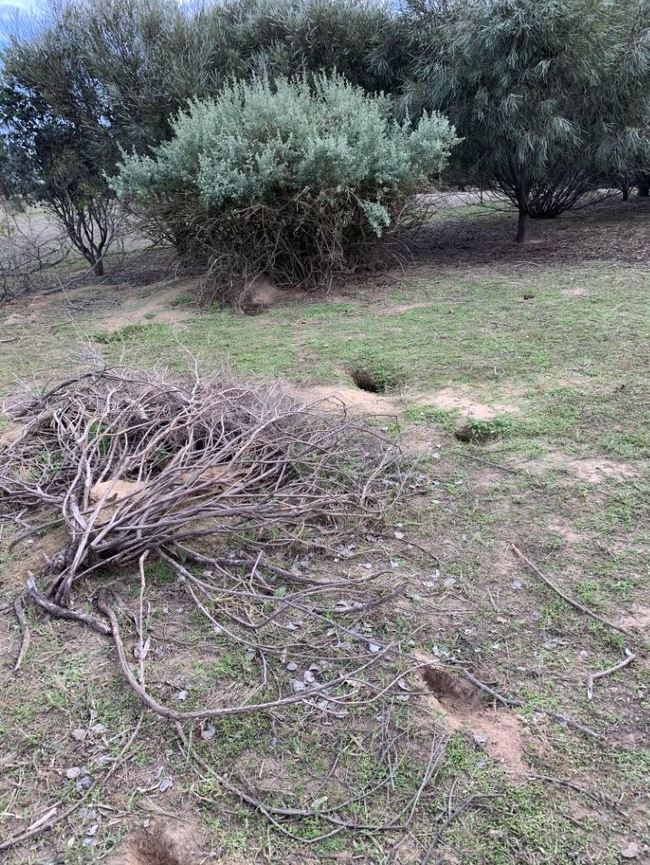 Rabbits can exist above ground where surface harbour is present. Fallen timber and logs, rocks, dense thickets of native scrub and woody weeds along with heaps of debris are ideal shelter. Rabbits may also become a problem around houses, farm buildings and other structures such as water tanks as human activity does not deter them.

In Australia, the most significant predators of rabbits are:

In Australia rabbits are affected by internal parasites such as:

Important external parasites on rabbits in Australia include the introduced European and Spanish rabbit fleas, which are important vectors in the spread of myxomatosis.

There are also two types of diseases in Australia that are deadly to rabbits, including Myxoma virus (MV) and rabbit haemorrhagic disease virus RHDV (formerly known as calicivirus). These diseases were brought to Australia as biological control options for rabbits and now occur throughout much of the rabbit’s range. Variable virulence and increased genetic resistance has lessened their effectiveness on rabbits over time. Therefore, efforts are being made to identify more virulent strains of RHDV and other viruses. Notwithstanding, MV and RHDV still limit rabbit numbers to about 15% of what they could be. Without them, the additional cost to agriculture alone could be in excess of $2 billion a year.

Rabbits have extremely high reproductive rate. A single pair of rabbits can increase to 184 individuals within 18 months.

That said, rabbits do require protein-rich, fresh growth to successfully reproduce. Therefore, they can breed year-round in good conditions, although most breeding in Victoria commences at the autumn break and continues until vegetation dries off by early summer.

Rabbits become sexually mature at 3 to 4 months. Their gestation period is 28 to 30 days and they have litters between 4 and 6 kittens. Kittens are born blind, deaf and almost naked in either short nesting burrows or above-ground nests. Mating can recur immediately after giving birth.

Rabbits have high rates of dispersal that are generally broken into two dispersal events. The first occurs during and immediately after the breeding season, where about 60% of young male and female rabbits disperse from the breeding warren to find unused burrows and safe above-ground harbour.

Most rabbits disperse short distances to join adjacent social groups. However, movements of up to 20 km have been recorded.

During dispersal, rabbits are vulnerable to many hazards such as predation and environmental extremes. Despite common opinion, rabbits do not readily dig new warrens and instead prefer to find an unused warren to excavate.

The European hare is the only animal in Australia that looks similar to rabbits. Hares are larger, have longer black-tipped ears, longer hind legs, move differently and can run faster.

The impact of rabbits on the Australian environment has been disastrous. At present, there are at least 304 Australian threatened fauna and flora species that are adversely affected by competition and land degradation by rabbits. Consequently, rabbits have been listed as a key threatening process to threatened species conservation under the Environment Protection and Biodiversity Conservation Act 1999 (EPBC Act).

Rabbits selectively feed on certain species of plants at critical stages of development, such as seeding and seedling establishment. This severely affects regeneration and recruitment of vegetation communities and can cause soil erosion. It may replace native species with noxious or unpalatable weed species. Ecological changes associated with high rabbit numbers have been blamed for the disappearance of the greater bilby Macrotis lagotis and the pig-footed bandicoot Chaeropus ecaudatus, as well as putting many other species under stress. Research in semi-arid sites has shown that rabbit densities of 0.5 per hectare (1 rabbit per 2 hectares) can severely damage some plant species.

In certain areas, rabbits are also in direct competition with native wildlife for food and habitat.

Rabbit populations can sustain high numbers of predators such as cats and foxes. This can cause increased pressure on native animals, particularly when rabbit numbers crash after control, drought or disease. Therefore, it is important to control foxes before undertaking rabbit control.

Rabbits graze more closely to the ground than domestic stock, weakening perennial grasses during summer and potentially eliminating them from established pastures. The pasture is then likely to be invaded by broadleaf weeds and annual grasses, making it less suitable for livestock production

Rabbits also affect revegetation and soil erosion reclamation projects by feeding on newly planted vegetation or burrowing. Even low numbers of rabbits can have a devastating effect on tree-planting programs or intensive horticultural operations. Rabbits also cause damage to grain crops and have significantly reduced crop yields in some areas. 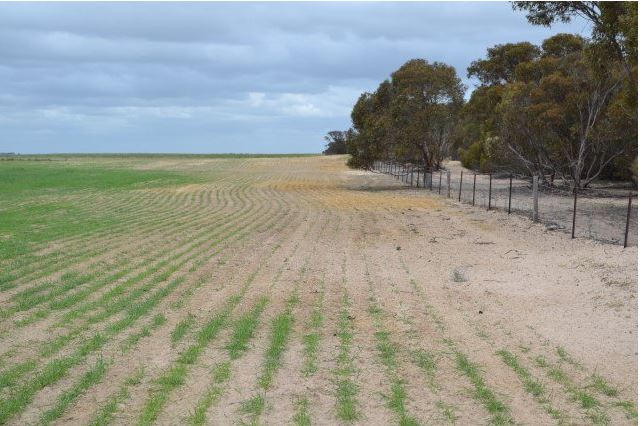 Where a land owner is served with a control notice, such as a Directions Notice or Land Management Notice, in accordance with the Catchment and Land Protection Act 1994, the land owner must comply with the specific requirements of that notice including undertaking the required measures listed in that notice during the stipulated time frame.

The department recommends integrated approach that includes baiting, ripping/harbour removal and follow up fumigation. This approach is often referred to as the 'Rabbit Recipe'. Landholders should also implement their control program in a coordinated manner at a landscape scale.