Photos and accurate descriptions of where and when the animal(s) was sighted are critical when making a report. Detailed information allows the Victorian Government to make a timely and positive identification. All reports are responded to as a priority and may result in trapping, surveillance and the removal of confirmed eastern corn snake.

You should never attempt to approach or handle a snake. All snakes should be considered venomous and highly dangerous. If bitten by a snake dial 000 immediately.

The eastern corn snake is not native to Australia and if given the opportunity could populate a wide range of landscapes within Victoria, impacting native species through predation and the introduction of new animal diseases.

Eastern corn snakes are classified as a controlled pest animal under the Victorian Catchment and Land Protection Act 1994. The importation, keeping, breeding and trading of this species, without appropriate permits, is illegal and penalties apply.

How to identify an eastern corn snake

Eastern corn snakes are relatively slender and are between 60 and 180 cm in length. Juveniles are similar to adults in appearance, hatchlings range in size from 22 to 36 cm. They can have a wide range of colour variation and patterns, with the most common being the natural colouration of combinations of orange, red, brown with yellow and black. However, they can be white, red, yellow, red, black, greys and brown with a variety of patterns and markings.

On their belly there are alternating rows of black and white marks, similar to a piano keyboard. The underside of the tail has two black stripes. 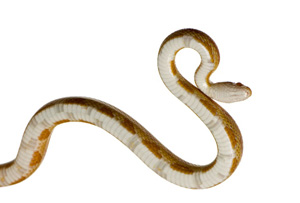 They have a spear-shaped pattern on their head and neck. They may be found in:

They are primarily nocturnal. They readily climb trees, can be very secretive spending most of their time underground prowling through rodent burrows. During the day they hide under loose bark and beneath logs, rocks, and other debris. In cold areas, they hibernate during winter but may emerge to bask on warmer days.

Eastern corn snakes are a potential host for foreign pests and diseases, which could threaten native Australian and domestic animals. They can carry ticks that spread the bacterium Cowdria ruminatntium that can kill grazing animals.

Eastern corn snakes are generalist feeders, their diet is opportunistic and includes:

Prey is killed by constriction as they are non-venomous snakes. It is anticipated that Eastern corn snakes would compete for food with other Australian native reptiles.