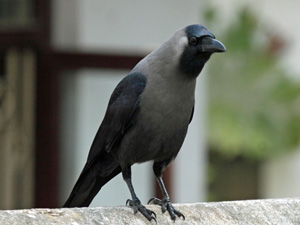 Photos and accurate descriptions of where and when the animal(s) was sighted are critical when making a report. Detailed information allows the Victorian government to make a timely and positive identification. All reports are responded to as a priority and may result in trapping, surveillance and the removal of confirmed house crow.

It is important to report house crow sightings

The house crow is not native to Australia and if given the opportunity could establish and breed in Victoria. If they become established in Victoria they may be a threat to primary production industries, causing severe damage to agricultural and horticultural crops. They also create a nuisance for people through:

House crows are classified as a prohibited pest animal under the Victorian Catchment and Land Protection Act 1994. The importation, keeping, breeding and trading of this species, without appropriate permits, is illegal and penalties apply.

The house crow is not known to occur in the wild in Australia. There have been several reports in Western Australia of their presence, most likely arriving as stowaways on international cargo ships. Given the impact of the species early detection, particularly in the vicinity of Victoria's international shipping ports, is critical to preventing their establishment in the wild.

How to identify a house crow 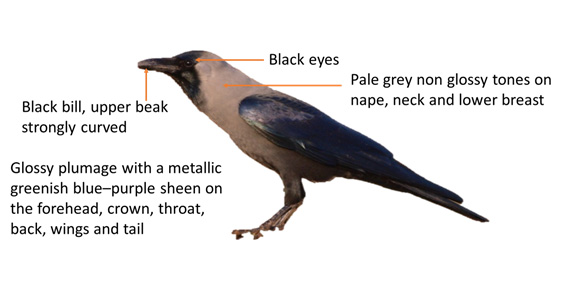 Adult house crows are typically 42 to 44 cm in length. They are smaller and more slender than other similar Australian native birds. Their plumage is a glossy black with a metallic greenish blue-purple sheen on the wings, forehead, crown, throat, back, and tail. Their neck, nape and lower breast are a paler grey tone and non-glossy. 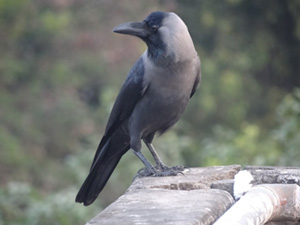 They have sloped foreheads, dark brown to black eyes and black legs and feet.

They nest in an untidy platform of twigs with a cup-like depression, lined with fibres. Some nests are almost entirely composed of stiff wire. The nest can be placed in tree forks, buildings, street-lamps and pylons. They do not use tree hollows. 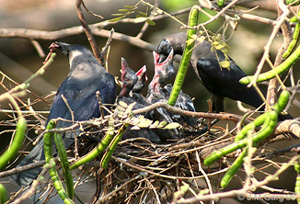 They are gregarious, sedentary birds that are known for their intelligence and boldness. Overseas, thousands of birds have been recorded at communal roosts. Other places they congregate include around food sources such as rubbish tips, abattoirs and markets. Their voice call is a short repeated 'caw-caw-caw'.

The house crow is similar in appearance to four native birds found in Victoria.

Collectively these are called corvids.

Australian corvids are very similar in appearance to the house crow but can be distinguished by their black plumage, white eyes and are typically larger than the house crow. It is also worth noting that juvenile native corvids can have lighter colour plumage and their eyes are brown colour. 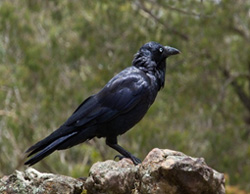 More detailed information on Australian corvids including a comparison table and downloads of their calls is available on the Bird Life Australia website.

If you still are in doubt as to whether the bird you have seen is a house crow, email photographs to highrisk.invasiveanimals@agriculture.vic.gov.au or contact the Customer Service Centre on 136 186 with details of the animal and a member of staff will contact you.

Overseas, the house crow is considered a major pest of the environment, preying on the chicks and eggs of native birds and destroying their nests.

Australian species that could be most affected by house crow include:

Given their scavenging nature, they could also be expected to become a general nuisance.