Black with a green or coppery sheen

Two upright horns on major males. Minor males have smaller horns and females have none.

Peaks of activity in spring (when eggs are laid) and autumn when the new generation emerges. However, they can be found all year.

Found over most of south eastern Australia, from southern Queensland to Tasmania and South Australia. 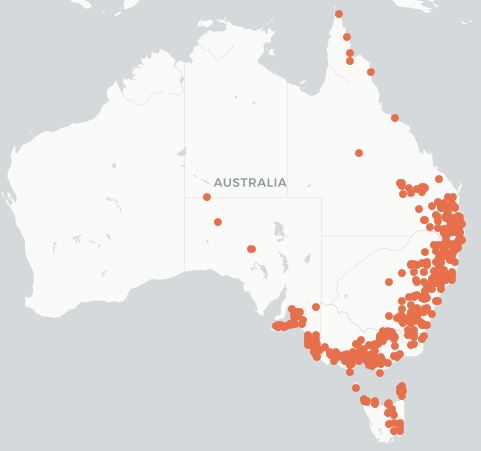 O. australis is easily confused with the introduced species Onthophagus taurus. However, O. australis has a green or coppery sheen while O. taurus are black. Other distinguishing features include segmented antennae that forms a club containing three to seven lobes. Major male O. taurus have long, curved horns, which differ from the short, upright horns of O. australis.

O. australis have been trapped on each of the participating SWPLG properties in good numbers, often with O. taurus.

O. australis will shred dung pats and also bury dung food balls throughout its life cycle. Laboratory experiments showed that O. australis has the capacity to significantly reduce bush fly populations if in large enough populations. However, their population size per dung pad is generally in low numbers.

O. australis mainly lay eggs in spring, emerging during late summer into autumn. For the first several weeks they are in a 'maturation feeding stage'. Most beetles are in the adult stage during the winter. Eggs are occasionally laid in autumn, which then emerge in spring. Populations tend to decline during summer droughts.