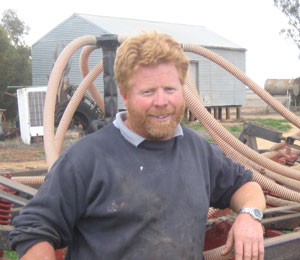 Peter Teasdale and his family have been farming at Rupanyup, Western Victoria, for generations. Growing up in the region, Peter has a keen eye for the changes that have been taking place.

Now a fourth generation broadacre cropper, he knows that being willing to make changes is a part of farming these days and is doing his best to grow more from less rainfall.

He remembers the times when water-logging was an issue on the farm, and recalls that 'we were doing it all wrong then. The soils were all worked and cultivated and were set up for water-logging to happen.'

On a changing climate Peter says, 'Clearly a vast majority of scientific community think that climate change is happening, but I'm not sure the run of dry years is all to do with that. The truth is somewhere in between.'

In recent years Peter has focused attention on the farming systems that will enable him to 'get better at growing stuff on less rain'.

He says, 'Whether it's man made climate change or a 200 year dry cycle, it doesn't matter to us.'

While planning for long-term climate change is a strategic task, understanding the seasonal climate drivers can help with on-farm tactical decision making. Seasonal weather drivers, such as El Niño and Sub-tropical Ridge, are good indicators of what the season may bring.

Peter uses sea surface temperature maps, but only when the time is right or when he wants to know where the rains are coming from. Peter understands that 'you need a contrast [of temperatures] across the sea surface to get things happening. The sea needs to be warm in the right spot.'

Peter uses a range of information sources to stay up to date on seasonal climate, including:

Part of Peter's strategy in response to a drying climate has been to introduce a no-till cropping system, which increases water use efficiency.

Peter first became interested in no-till farming when he looked over his neighbour's fence. He was convinced that there was no way his neighbour's lentils would get up under his system, but sure enough they were the best lentils in the district that year. Peter didn't jump straight into no-till however, first opting to join the Victorian No-Till Farmers Association to investigate more.

In retrospect Peter thinks he should have converted his farming system to no-till sooner, but for him learning-by-doing was the best approach. A no-till system was Peter's preferred strategy when managing decreasing water availability. He preferred this over other strategies such as hay, fallow and sheep, which he believes all have inherent adverse effects on a system's capability to capitalise on rainfall.

In 2009 Peter's farming business took another step towards climate resilience and began converting and modifying machinery to suit a controlled traffic system. Peter says 'controlled traffic farming is agriculture's inconvenient truth. There is nothing pretty or enjoyable about it. It makes tractors look ugly, and there is a lot to get your head around. But, this strategy has no adverse effects. You just have to do it.' Peter says there is a big difference between having the straw standing, compared with laying down.

Controlled traffic allows centimetre perfect precision when sowing crops and means that after harvesting one crop a new one can be planted between the rows of stubble. Retaining stubble protects soil from wind which can draw a lot of moisture from the ground. 'After 20 millimetres of rain, the non inter-row sown crops will dry out a lot quicker.' Setting up a controlled system has meant some initial extra expense, but Peter says 'it's worth it' and believes it's staggering that more people are not prepared to change.

While Peter knows that a controlled traffic no-till system may not enable him to get maximum return in a perfect year, he is confident that the soil structure is good, soil biota is high and it should be able to handle wetter periods.

'I may not be able to grow the heaviest crop in the district when conditions are perfect on my wider rows, but the fact is I can grow lentils and other crops in between the cereal rows the following year, and other guys won't be able to. This should mean the troughs won't be so deep in the adverse seasons.'

Peter says that the climate system has been laying down some challenges to farmers in recent times and it's not over till the last grain is in the silo. 'Even then you have to worry about the pricing drama' he says. November 2009 was evidence of an unprecedented climate event, when a heatwave destroyed what was set to be a bumper lentil crop.

Despite challenges (climate, economic and other) Peter says, 'I don't think it's clever to keep doing the same thing and hope something changes for you. This is not a good strategy. I'm hoping that Al Gore is wrong and climate change is not as catastrophic as people are talking about and normality returns. No doubt we will need to keep tinkering with the system, but that's what we do.'

Peter summarises: 'Plan for the worst and hope for the best.'

Australian broad-acre farmers have a history of innovation and incrementally adapting their farming systems to the many challenges they face. Under a changing and more variable climate, there is a risk that incremental changes alone may not be able to offer farmers the solutions they will need to maintain productivity growth and profitability over the long term.

There are a number of change pathways that can be considered by farmers, be they incremental or transformational. Thinking about the scale of change helps farmers identify the options that are suitable for their farm family situation.

Agriculture Victoria are seeking positive and practical stories about climate change action. Contact us on 136 186 if you have a story to share.