Cereal crops can be ensiled (fermented) either as a cut and wilted crop or as a direct cut crop. It is often referred to as 'Whole-crop cereal' silage (WCS).

The ensiling of forage cereal crops for silage  is called whole-crop silage (WCS) or may be referred to as green chop silage, fermented whole-crop or small grains silage. The dry matter (DM) range recommended for WCS is 33%  to 50% DM, depending on stage of growth and type of equipment used for harvesting.

Cereal crops which have been affected by frost or unfavourable weather conditions resulting in unsatisfactory grain yields can also be ensiled.

The stage of growth of the crop at harvest will determine whether it is mown and wilted before harvesting or direct cut and ensiled as a 'standing' crop. However the height of cutting can have some implications on the stored product.

Cutting height is usually 7 to 10cm above ground level. Cutting higher will result in a slight increase in nutritive value but reduced yields accordingly.

If mown and wilted the higher cutting height will also tend to keep the mown swath higher off the ground thereby allowing more airflow under the crop and a slightly faster wilting rate. It will also reduce the risk of soil contamination from other equipment operations such as raking.

However cutting at greater heights will leave behind increased levels of stubble which creates a problem of removal in the future and preparation for the next forage.

Harvesting at this vegetative stage (18 to 22% DM) will require the crop to be wilted to reach the desired DM content before harvesting, and particularly so for cereal and legume mixtures. Mowing with a roller type mower conditioner (Figure 1) is recommended to crimp or crack the stems which will encourage quicker wilting. Wilting rate will be increased by 20 to 40% compared to mowing only.

The amount of increase will depend on: Tyned type mower conditioners will also increase the rate of wilting through mainly an abrading (bruising) action on the leaves and stems plus some crimping (Figure 2).

A brush type mower conditioner will abrade the waxy layers on most surfaces of the plant which increases the wilting rate.

The aggressiveness of conditioning can be altered on all machines via equipment settings. Drier material — especially if the stems are hollow — are more effectively conditioned by the roller type machines.

Super conditioners, often used for export oaten hay, have a much more aggressive crimping and abrading (bruising) action and result in faster drying than even roller conditioners.

Conditioner-only machines will also achieve the desired effects, but will require the extra pass as soon as possible after mowing.

The conditioned stems will also allow a more reliable and easier picking up by harvester and baler pick-ups and subsequent feeding into the respective cutting or roller mechanisms.

Unfortunately high yielding crops will be relatively slow to wilt even if conditioned. In all cases, leaving the windrow as wide and thin as possible (less dense), and in a 'fluffy' state, will increase the wilting rate substantially. 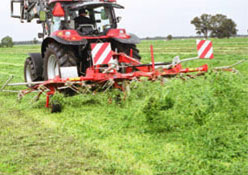 Tedders (Figure 3), which spread the mown crop after mowing, will also increase wilting rate, but may not be so effective on high yielding crops and may fatigue the equipment. If a tedder is used in a heavy crop, retedding half to one day later may be necessary to even out the wilting throughout the windrow. Be wary of creating clumps with repeated teddings in heavy crops.

Another disadvantages of using a tedder in cereal crops, apart from the extra pass required to do this job, is that the tedder must be set up to avoid the tynes picking up soil while operating. Be aware that the leaves may dry much quicker than the stems if a tedder is used in crops at the later growth stages (grain formation). However, a tedder is very beneficial to respread a crop that has been weather affected.

The DM content of wheat, barley and triticale at the soft dough stage of growth will be in the desired DM range as a standing crop range. They can be either direct harvested with forage harvesters fitted with specifically designed cutting fronts or pre-mown and immediately picked up by the forage harvester.

Whole-crop cereals should ideally, be harvested using a precision chopping forage harvester to ensure a short chop length (20 to 50mm actual length). This ensures the material can be well compacted in the stack or pit so minimising the amount of air trapped thereby resulting in reduced losses (nutritive value and DM). Losses are due to continued plant and microbial respiration during the early phases of fermentation.

Most other forage harvesting machines such as self-loading wagons cut the material to varying lengths, often over 200mm, making adequate compaction very difficult.

The drier the crop DM content at harvest, the shorter the chop length required. Chopping the material short also ensures a thorough mixing of the high nutritive heads with the much lower nutritive stems and leaves.

Increased density also reduces the rate of aerobic spoilage at stack opening, a common although not an insurmountable problem with cereal silages. Less wastage also occurs as animals cannot easily select the heads and leave the stem material when fed.

Forage cereals being direct harvested at the later growth stage is increasingly being carried out with forage harvesters that have a cutterbar instead of the typical rotary dics mowers to reduce grain loss. Grain loss from the gaps in the housing of the chopping and feeding mechanisms can be minimised by fitting blanking plates.

Grain loss may be slightly higher in pre-mown crops due to the rotary disc action of the mower and, particularly if raked before harvesting, DM yield and nutritive value will also be slightly lower.

If the crop is harvested after the soft dough stage, the grain will be hardening as it matures. Forage harvesters — which are fitted with specific rollers for cracking grain — often referred to as 'primary processing', will be essential.

Harvesting whole-crop using balers is not recommended as dense compaction is often not achieved and vermin damage to the bales in storage can be a serious problem. If whole-crop cereals are to be harvested with round and square balers the material needs to be wilted to slightly higher DM contents to ensure a lactic acid fermentation occurs.

Balers with chopping mechanisms are highly recommended to aid compaction. The fermentation process and animal intakes of WCS will also benefit substantially from the chopping. Once past the ideal stage for harvesting, cereal stems become more lignified (stiffer) and the stems are hollow (contain more air internally). These drier stems will allow increased air to be trapped within and between the stems in the bale. In this situation a chopping baler, with all knives in operation, is highly recommended. An alternative is to bale at the moister end of the DM range recommended for baling. Baling with some dew on the material will also be useful if DM levels are above those recommended.

Baling at a slower forward speed will also allow most balers to produce a denser bale. Baling material that is too dry, or not tightly compacted, results in large volumes of air being trapped in the bale thus reducing nutritive value and increased risk of puncturing by the stalks.

Feedback from some machinery operators indicate that if a mower only is used for the later growth stages of the crop, particularly when baling, the baler should travel in the opposite direction to the mower. The heads of the crop are picked up first which results in much less trouble in the picking up and feeding in of the forage into the machine. However one piece of research has indicated that friction from the rolling mechanisms in some balers induces heavier grain loss than that from forage harvesters.

Applying netwrap instead of twine will also reduce the amount of air trapped between the plastic and the bale as the twine, especially in slightly loose bales, will pull into the bale. This allows air to travel around the twine once plastic is applied, possibly becoming mouldy, particularly if holed. Applying netwrap will also minimise straw stalks protruding from the bales which can puncture the stretchwrap plastic seal, allowing air to enter.

A common problem in WCS is the onset of spoilage and subsequent heating after opening the stack. There are now products specifically designed to minimise aerobic deterioration by moulds and yeasts in forage cereals.

Some inoculants contain a strain of bacteria called Lactobacillis buchneri 40788 which results in silages with increased acetic acid which can inhibit mould and yeast growth. However there are also other products which inhibit aerobic deterioration as well as assist the fermentation process itself at the harvest end.

All additives are applied during harvest and most require thorough mixing with the forage to be effective. The products are available as liquid or granular form and usually applied behind the pick up or into the forage harvester chute.

Many inoculants will become ineffective if mixed with treated town water or water becomes too warm before application. Carefully follow the manufacturer's instructions and suggested application rates to ensure the effectiveness of the products.

Forage cereals can be affected by frost, drought, wind (lodging) and shortages of rain at critical grain filling stages resulting in crops which may not be harvested economically as a grain crop, but may be ensiled.

A feed analysis of any weather affected crop is recommended to ascertain its quality for ration formulations.

Lodging occurs when portions of the crop fall over due to strong wind, and occasionally in very high yielding crops and varieties with weak stems.

The lodged plants will then begin to deteriorate in nutritive value, and the grain may even begin to sprout if advanced enough in its formation (hard dough stage).

If possible, harvest the crop within days before its nutritive value deteriorates too much and mould and deleterious bacteria build-up occurs. Travelling in the opposite direction to the lodged plants will ensure less difficulty in the harvest operation and minimal losses.

Crops lodged for some period of time can be a problem. If the harvester travels in the opposite direction to which the plants are lodged, its nutritive value will be decreased due to harvesting the decaying plants. This decaying plant material will also adversely affect the fermentation process.

Drought stressed cereal crops can often be successfully harvested as silage as a salvage operation. Management of these crops for silage is the same as for the usual ensiling operations.

Crops, most likely, will not be at the optimum growth stage for cutting and may necessitate an early decision to cut before the crop quality deteriorates. Be wary that the material may be drier than ideal, necessitating very short chop, dense compaction and sealed airtight.

Given the crop is experiencing drought conditions, haymaking may be the best option for these crops.

Frosts occurring at the pre-heading to flowering stage of wheats (and most cereals) — can affect the plant's ability to continue through to a successful grain formation. This has implications for quality of forage cereals harvested after this stage. Frosts generally do not affect most cereals too severely up to this stage so that a frosted affected crop should still be of high quality and could be ensiled successfully, if harvested and stored correctly.