Precision chopping is the preferred method for harvesting whole-crop cereal silage compared to baling, despite the latest balers having chopping mechanisms as an option. The very short chop length achieved by a precision chopper facilitates the compaction of the stored product, particularly when made at the later growth stage — soft dough.

Forage cereals may be baled at the vegetative stage but the crop must be mown and wilted to over 33% DM to ensure a satisfactory (lactic acid) fermentation. Bales must be densely compacted and this is more effective using balers with chopping mechanisms.

Baling forage cereals at the soft dough stage, often does not achieve a high enough density in the bales. Apart from increased amounts of air trapped in the bales leading to dry matter and nutritive losses — plus possible puncturing of the plastic seal by the stalks — they are prone to damage by vermin due to the presence of grain.

The material stored in any storage system must be:

Baled silage storage can be:

Precision chopped material can be stored in:

They can also be stored in stretchable sausage bags.

Precision chopped forage, being very short in length but ideal for compaction, will not bind in a stack compared to longer material. In particular, material harvested at the soft dough stage may tend to move when rolled by the compacting machinery.

To minimise this and the danger it may present to operators, stacks with some type of side constraint — (such as in ground pit, dirt walls or cement walled bunkers) — are preferable to rectangular or circular bun stacks above ground.

A general rule of thumb for ensuring maximum compaction based on the weight of the packing or rolling tractor is:

A stack being filled over several days should be covered overnight with a plastic sheet to minimise plant respiration and heating.

Each new day's harvested material should, ideally, cover yesterday's material by a depth of at least one metre to prevent continued respiration of the earlier harvested material. If on the second or third day of filling a stack, a hand pushed into the face up to the wrist feels very warm or hot, then aerobic deterioration is occurring at a rapid rate, (lost DM and nutritive value plus rapid increases of yeast and moulds). This could be caused by:

Mud, dead animal carcasses or decaying plants must not enter the storage as the bacteria they contain will be damaging to the fermentation process. Ensiled carcasses can cause animal deaths due to botulism.

Once harvesting and the final compaction is completed, seal the storage airtight, using plastic sheets specifically manufactured for silage (greater than 150 micron thickness). Most commonly used is the co-extruded white-black plastic, placing the white side up to reflect the sun's heat. 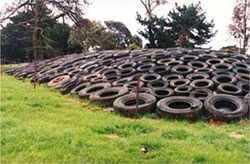 Place weighting over the entire surface area of the stack. Car tyres, all touching each other, are commonly used. Be wary of holing the plastic from wire in tyres or your foot imprints. 'Sausage' bags made from last year's plastic is an alternative to tyres. These are very useful on the plastic overlaps, for sealing the stack edges on the ground or along the insides of bunker walls. They follow the indentations of the ground or stack surface being slightly flexible in structure. Where 2 rows of are used — overlap the sausage bags rather than laying them together side by side — to minimise air entering where the ends meet.

These are large stretchable bags or tubes into which forage, mainly used for maize silage, is compressed to a certain level of pressure. The bag stretches to a set tolerance and the tendency to contract maintains an airtight storage. Whole-crop material must be chopped very short and well compressed to ensure satisfactory storage conditions with these bags. The storage (plastic bag) should last at least 2 to 3 years before the plastic loses its integrity, allowing air to enter.

Round and square baled whole-crop cereal silage must be compacted densely and sealed airtight within 1 to 2 hours after baling.

Round bales, preferably should be chopped to aid compaction, fermentation to allow an increase in animal intakes given the extremely long cereal plants.

Chopping is particularly important when baling at the later soft dough stage when stems are more lignified and hollow. However square bales are very dense in nature after baling. Chopping is optional although desirable for increased intakes and use in TMR mixer wagons.

Individually wrapped bales must be sealed over their entire surface area with at least 4 layers of stretchwrap plastic with 50% overlap, using 55% stretch. However there are some products available which have undergone some prestretching at the manufacturing facility and may require modifications to the pre-stretcher gearing.

Most other countries  advocate a 70% stretch thereby stretching the plastic thinner, so requiring 6 layers of plastic.

However, applying six layers in Australia provides added insurance against air intrusion into the bale, and especially so if it is being deposited onto stubble. The extra layers also give a strengthened seal if bales are being transported after wrapping. Six layers are essential if the baled crops are stemmy or stalks are inclined to protrude. The extra layers will most likely allow 2 years storage time instead of the manufacturers' guaranteed 12 months using 4 layers.

Bales should be stored on their ends to maintain their shape and to present the multi-layered ends to the sunlight and birds and problematic insects and grubs at ground level. Continuously wrapped bales also use the stretchwrap plastic stretched to 55% but is overlapped by 75%.

This system will reduce the amount of stretchwrap film used per bale by about 30 to 40%.

The bales should be of even diameter to prevent over-stretching of the film where the bales meet. If the line of bales is long, segment the run in several places by inserting a seal, (wrapped bale) to act as a plug if feeding out is stopped before the line is completely fed out. Bird problems in this system may be reduced by stretching hay netwrap along the length of the rows of bales.

These are large diameter plastic bags or socks which contract onto the bale once inserted.

Although an uncommon and relatively expensive method for storing bales the film is strong and offers a storage possibility for 2 to 3 years, if not holed. Tube length varies between about 45 to 80m. A machine is required to expand the diameter of the plastic to allow insertion of the bales and the film then contracts tightly back onto the bale. Bale diameters should be even so that air is not trapped in the space left between large and small diameter bales. Mould and yeast grow in these areas resulting in losses and reduced palatability.

Birds and vermin can be a serious problem with baled silage made at the soft dough stage. Removing the bales from the paddock, if possible, within hours of harvest may diminish the problem with birds.

Vermin (field mice in particular) — appear to sense the grain of whole-crop forage baled at the grain formation stage. They will chew many holes through the plastic resulting in large losses.

To minimise this, store the bales on a cleared (preferably sanded) area, leaving the bales spaced to allow regular inspection and immediate repair.

The use of suitable baits, placed a small distance from the storage site, will assist. A hilled circle of slaked lime around the circumference of the bales is often useful as the mice dislike hills and the effect of the lime on their claws.

Above ground storage under plastic sheets

Storing unwrapped round bales under sheets of plastic above ground is not recommended for whole-crop cereal silage due to the inherent air pockets unavoidably formed in these systems. Whole-crop cereal silage is very prone to aerobic deterioration and spoilage. Unwrapped round bales under sheets of plastic will invariably result in substantial losses (DM and quality), not to mention the disasters likely to occur due to poor sealing or puncturing of the sheet.

Due to their shape and density, large square bales can be reasonably satisfactorily stored above ground under sheets of plastic. However seal must be airtight at the base and maintained hole free.

Due to the unavoidable variation in bale lengths, stack the bales along one side and adjoining side to form straight edges. The remaining two edges will be uneven and trap air once sealed.

Store only enough bales for 14 to 16 days feed in each compartment in this system.

Storing unwrapped round bales of WCS in pits is not recommended for the same reasons given for not storing above ground under sheets.

Large square bales are much more suited to storing in pits if stacked tightly and the edge seals are airtight.

If designing a pit for large square bales — and the soil type allows — aim for vertical sides to assist with stacking, air reduction, and sealing.

Stack the bales tightly against one side of the pit and the back to minimise air entrapment. This will leave one side with uneven edges, and possibility of trapping air. If possible, lay the plastic down into the pit on the side with the uneven bale ends. Then place some sand or soil down between the plastic and wall to force out air. If the soil type necessitates the pit sides to be battered (sloped) — storing and sealing will be more difficult and expensive to achieve.

Placing a thin layer of soil or sand on the plastic sheet on top of the stack will minimise air travelling back along the top and side of the stack thereby preventing spoilage. Tyres touching each other on top will suffice but will not be as effective.

Use sheets of plastic to compartmentalise the stack into individual and independent modules of about 14 to 21 days feed per section.