The most important root and crown diseases of cereal crops in Victoria are cereal cyst nematode (CCN), take-all, rhizoctonia root rot, crown rot and root lesion nematode. These diseases can cause significant yield loss in crops.

Fortunately, they can be easily controlled with crop rotation and resistant varieties.

The effective management of cereal root diseases begins with the accurate identification of pathogens in the paddock. Farmers can identify the pathogen by either inspecting the roots of cereal plants for disease symptoms or by using a PreDicta B soil test.

To identify root diseases during the growing season farmers can dig up suspect plants and inspect their roots.

Plants should be sampled using a spade, and not pulled out of the ground. This will ensure a good sample of roots is available for inspection. Soil is then carefully washed from the roots under running water.

Roots are then inspected for disease by floating them in a white tray of water, and looking for the different disease symptoms.

There is a soil test available, marketed as PreDicta B that can be used to determine the amount of disease inoculum in the soil. The test can be used before sowing to identify paddocks that are most at risk to root disease.

More information on soil testing is available from local agronomists.

The in crop symptoms of CCN or eelworm (Heterodera avenae) include stunting and yellowing, which often gives the crop a 'patchy' appearance. The presence of CCN can be established by inspecting the primary roots, and looking for abnormal branching and knotting. Symptoms can be confirmed at flowering time by the presence of small (1–2mm in diameter) white 'cysts' that are attached to the roots. 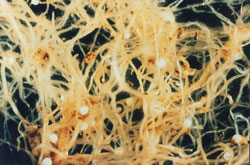 CCN survives between susceptible cereal crops as eggs inside protective cysts that form on the roots of host plants.

In the autumn, nematodes hatch from eggs in response to moisture and low temperatures (<15°C). Nematodes hatch over a period of several weeks, with the peak hatch occurring about 6 weeks after the autumn break. In a further 8 weeks these nematodes will form viable eggs. Therefore, to prevent CCN multiplying, it is necessary to control host plants within 10 weeks of crop germination.

CCN has a narrow host range that is limited to cereals and some grass weeds. Susceptible cereals (some varieties are resistant) and wild oats are the most important hosts.

CCN is likely to be a problem when:

Plan ahead and make sure there is at least a 2 year disease break following susceptible cereals on paddocks infested with wild oats.

Timing of host removal is critical when establishing a disease break. In calculating the critical date to chemical fallow or remove host species from break crops consideration should be given to the time taken for host plants to die after herbicide application. Nematodes will continue to feed until the plant is dead.

Host plants, particularly wild oats and susceptible self sown cereals, must be controlled before the nematodes have completed the development of eggs. This is approximately 10 weeks after the autumn break.

The use of resistant cereals and non-host crops, or fallow in rotations as part of a two year break is an effective method to control CCN. The most characteristic symptom of take-all (Gaeumannomyces graminis var. tritici) is a blackening of the sub-crown internode and roots. The take-all fungus gets into the centre of the root (stele) so that when roots are snapped, and observed end on, the root is black to the core.

In severely infected plants this blackening may also progress to the stem base under the leaf sheath.

Plants affected by take-all usually occur in patches within a crop, but may also be scattered randomly throughout. In a severe outbreak the entire crop may be affected.

Above ground, plants appear stunted and yellow green in colour with reduced tillering. The take-all fungus blocks the water conducting tissue in the plant and restricts water uptake. This can cause infected plants to ripen prematurely, which often results in deadheads or white heads with little or no grain filled.

Low soil moisture during October and November increases the occurrence of deadheads.

Take-all can only survive between susceptible crops in the root and tiller bases of previously infected plants. Following autumn rains, the take-all fungus grows out of this material and attacks the roots of susceptible plants.

In the absence of hosts, the fungus is unlikely to survive for more than one year.

The build up of take-all is greater during wet springs, but its carry over is reduced following significant summer rain events (ie > 25 mm in a single event).

Take-all has a host range that is confined to grass species:

Take all is likely to be a problem when:

Plan ahead and have a grass free break in the year before cropping.

Start fallow or remove grass weeds from break crops before the end of July (end of June in the Mallee) to prevent the fungus multiplying, and being carried into the next crop. This will also give plenty of time for plant debris, in which the fungus survives, to break down.

Chemical treatments applied to seed or fertiliser are available to reduce the impact of take-all if sowing into paddocks with medium levels of take-all.

However, it is best not to sow wheat into a paddock with high levels of take-all. Barley is more tolerant of take-all than wheat, and delayed sowing can reduce the impact of take-all by giving more time for inoculum break down.

Little can be done for an infected crop during the season. Diseased plants are usually stunted and sometimes appear purple in colour. If plants are severely infected, the root systems will be small, discoloured and have characteristic brown 'spear tips'.

Bare patches may appear in the crop from an early growth stage and form sharply defined areas of stunted plants. Bare patches may vary in size from a few centimetres to several metres in diameter.

Rhizoctonia root rot is caused by Rhizoctonia solani (AG-8) which survives between crops in particles of plant residue in the soil. The fungus grows out of this material after autumn rains and spreads rapidly, forming a hyphal net in the soil. The roots of germinating plants are infected when they grow into the hyphal net.

The fungus is most active between temperatures of 10°C and 15°C.

Rhizoctonia has a wide host range and all crop, pasture and weed species grown in rotations are susceptible. There are no resistant cereal varieties, and crop rotations are not effective in controlling this disease.

This makes rhizoctonia extremely difficult to control. However, the fungus is susceptible to soil disturbance as this breaks up the hyphal network in the soil. Therefore, disease damage can be reduced to low levels by using fallow, cultivation or modified sowing equipment.

Plan ahead and prevent the fungus multiplying in the year before sowing. Control grasses and prevent seed set with selective herbicides by spray topping or cultivation.

Rhizoctonia multiplies on weed roots so it is imperative to control weeds from the first autumn flush. If weeds are established, a 3 to 4 week chemical fallow prior to sowing, will reduce disease damage. Weeds must be dead for 2 to 3 weeks before sowing.

In a season with a late break do not delay sowing past the optimum sowing date in order to chemical fallow for rhizoctonia control.

Soil disturbance has, in many instances, proved effective in controlling rhizoctonia. However, multiple cultivations before sowing are not necessary, provided weeds are controlled and there is a single deep cultivation (50mm under the seedbed) in the fortnight prior to sowing.

In a direct drilled operation, a depth modified combine that disturbs the soil 50mm under the seedbed while sowing at the correct depth, will provide enough soil disturbance to reduce disease damage. This can be done by using a long narrow point or by having cultivating tynes working directly in line with, but 50mm deeper than sowing tynes.

It may be necessary to use a deflector plate with the long narrow point to prevent the seed dropping to the furrow bottom.

The two important species of root lesion nematode common in Victorian cropping soils are Pratylenchus neglectus and Pratylenchus thornei. They often occur together.

Root lesion nematodes can cause large grain yield losses, particularly in wheat and chickpea crops. At least 20% of cropping paddocks in south eastern Australia have populations of RLNs high enough to reduce yield.

In the field, symptoms include stunted growth, uneven patches or waviness across the paddock. The main symptoms include lesions or discolouration of the roots, and lack of branching along the main roots.

Unlike the cereal cyst nematode, root lesion nematodes do NOT cause the roots to swell or knot, and no cysts are produced.

Root lesion nematodes are worm-like organisms less than one mm in length which feed on root tissues. Unlike cereal cyst nematode, the RLN has more than one generation per season, and is able to migrate between and within the roots and soil. These nematodes survive over summer in a dehydrated state, becoming active again once moisture is available.

RLNs have a broad host range that includes cereal and broadleaf crops.

RLNs are more likely to be a problem when:

Control of RLN is based on crop rotation. Rotations which include resistant crops will reduce the nematode population in the soil.

Susceptible wheats and chickpeas are good hosts of RLN. When grown consecutively wheat and chickpeas can lead to high nematode populations. The yield loss caused by RLN is related to the number of nematodes present in a paddock. 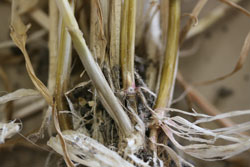 The symptoms of crown rot (caused by Fusarium pseudograminearum or Fusarium. culmorum) are most obvious on plants close to maturity. However, the fungus may cause a seedling blight which can result in either pre or post emergent death.

Plants affected by crown rot are frequently stunted and produce fewer tillers. Disease symptoms at the base of plants include honey brown discolouration of the crown, lower leaf sheaths and tillers. Symptoms can extend up the stem, where the fungus may form pink spore masses at the nodes. By comparison, plant roots and crowns infected with take-all are distinctly black.

When the disease is severe, plants die prematurely and deadheads or whiteheads are produced. The deadheads are either empty or partially filled with shrivelled grain. Affected plants may be scattered across a paddock or occur in patches. Yield losses are greatest in dry years, especially when moisture stress occurs after flowering.

The fungus can survive for up to two years on infected cereal stubble, from previous cereal plants, volunteer plants or grass weeds.

For this reason, stubble management is an important aspect in the control of crown rot. Survival is enhanced by dry summer conditions, but disease development is favoured by moist humid conditions, with temperatures between 15C and 20C.

Crown rot can be a serious problem in:

Other host plants include:

Crown rot is more likely when:

Rotations with non-susceptible crops can reduce the severity of crown rot. A 2 year break with a pulse, oilseed crop or fallow will reduce crown rot following wheat or barley crops. Grass-free lucerne and medics will also reduce disease severity.

Stubble management is an important factor determining the survival of the fungus. Agronomic practices that encourage greater retention or slower decomposition of stubble can increase the severity of crown rot.

Burning stubble can reduce, but not control crown rot. However, burning stubble is undesirable as the retention of stubble helps reduce erosion and aids the storage of water over summer.

As a compromise solution, burn stubble as close as possible to sowing.