This disease has increased in importance in the high rainfall cropping regions during the last five years, even though it has been well controlled in Victoria for the last 30 years through the use of partially resistant wheat varieties.

The increase in STB in the high rainfall zone has been favoured by:

STB is prone to developing resistance to fungicides. Resistance to some triazole (Group 3) fungicides was recently detected in Victoria by Dr Andrew Milgate, NSW Department of Primary Industries.

To minimise the chance of further resistance developing it will be important pay careful attention to fungicide strategies and use an integrated approach to management.

The fungus causes pale grey to dark brown blotches on the leaves, and to a lesser extent stems and heads. The diagnostic feature of Septoria tritici blotch is the presence of black fruiting bodies (pycnidia) within the blotches. 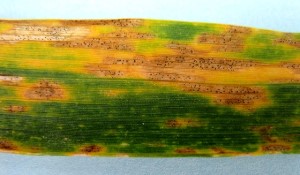 These tiny black spots give the blotches a characteristic speckled appearance. When the disease is severe, entire leaves may be affected by disease lesions.

In the absence of the black fruiting bodies, which are visible to the naked eye, similar blotching symptoms may be caused by yellow leaf spot or nutritional disorders such as aluminium toxicity or zinc deficiency.

The only other disease that has black fruiting bodies within the blotches is Septoria nodorum blotch, but this disease is rare in Victoria. When susceptible and very susceptible varieties are grown, Septoria tritici blotch is likely to cause annual average losses of up to 20 per cent, with much higher individual crop losses possible.

Septoria tritici blotch survives from one season to the next on stubble. Following rain or heavy dew in late autumn and early winter, wind borne spores (ascospores) are released from fruiting bodies (perithecia) embedded in the stubble of previously infected plants. These spores can be spread over large distances.

Early ascospore infections cause blotches on the leaves. Within these blotches a second type of fruiting body, pycnidia, are produced. Asexual spores ooze from pycnidia when the leaf surface is wet and spores are dispersed by splash to other leaves where they cause new infections.

This phase of disease development depends on the rain splash of spores, therefore Septoria tritici blotch will be most severe in seasons with above average spring rainfall. A combination of wind and rain provides the most favourable conditions for spread of this disease within crops.

An integrated approach that incorporates variety selection, cultural practices, crop rotation and fungicides is the most effective way to manage Septoria tritici blotch.

The majority of commercially grown varieties now have partial resistance (that is, they are moderately susceptible) to Septoria tritici blotch. This resistance has to date been durable and sufficient to effectively control this disease in Victoria.

It is important to very susceptible varieties as they will build up inoculum levels. This will cause yield loss in that variety, and in adjacent moderately susceptible wheat crops.

For information on the resistance status of varieties consult a current Victorian Cereal Disease Guide.

Following an outbreak of Septoria tritic blotch do not sow wheat into infected stubble and avoid early sowing, as a high number of ascospores are released early in the season.

If this is not possible, destroying stubble by grazing or cultivation will reduce the number of spores available to infect the new season's crop. This practice is not practicable in light soil areas where stubble must be kept to prevent erosion.

Such practices will have more effect if undertaken on a district basis.

Crop rotations are important to ensure wheat is not sown into paddocks with high levels of stubble-borne inoculum.

A 1-year rotation out of wheat is generally effective to provide disease break. However, the fungus may survive for over 18 months on stubble during very dry seasons.

Some seed applied fungicides can suppress early infection and should be used in areas where Septoria tritici blotch is known to occur.

Fungicides with reduced effectiveness to Septoria tritici blotch include:

Dr Milgate found that resistance may not be causing reduced spray efficacy at present, but a strategy to prolong effectiveness will prolong the life of this fungicide group.

There are a number of methods thought to reduce the selection rate for further mutations.

The first method is to alternate different triazoles, as not all triazole fungicides are affected equally by mutations of the Septoria tritici blotch fungus. This means not using the same traizole fungicide more than once in a crop, if multiple sprays are required during the season.

The second is to used fungicides that combine triazoles, such as propiconazole and cyproconazole, or tebuconazole and flutriafol, which are registered for Septoria tritici blotch.

Strobilurins on their own are considered to be at high risk of developing resistance due to their single site mode of action.

While not yet registered in Australia, SDHI (Group 7) carboxamide fungicides mixed with triazole (Group 3) fungicides are being used in New Zealand and the United Kingdom to manage Septoria tritici blotch.

When using fungicides, it is important that growers always follow label guidelines and ensure maximum residue limits are adhered to.

Resistant mutations of the Septoria tritici blotch fungus have been identified in other countries, including New Zealand, the United Kingdom and mainland Europe. It is important to not accidentally introduce these resistant mutations into Australia after travelling overseas.

The risk of introducing exotic diseases or new mutations of a pathogen into Australia can be minimised by having a biosecurity hygiene plan following overseas travel.

Basic biosecurity hygiene includes washing clothes and cleaning footwear before returning to Australia. If high risk areas have been visited, consider leaving clothing and footwear behind. Remind family members, employees or others travelling to also take these precautions.