Bunts and smuts of cereals

Bunt and smut fungi can cause the most devastating disease of cereals. The zero or very low tolerance levels at receival centres can make diseased grain only saleable as low value stock feed. Fortunately, the regular use of seed applied fungicides (pickles) can cheaply and effectively control these diseases.

Wheat, barley and oats are susceptible to several smut and bunt fungi. In most cases, each of the cereal smuts are caused by a distinct species specific to each crop — that is loose smut of wheat is different to loose smut of barley.

In general, this disease is well controlled because of the widespread use of seed treatments. However, bunt outbreaks are reported every year, most often in crops where seed treatments have not been used, are not used every year or where inadequate coverage of the seed has occurred.

A bunt infection of wheat is usually first noticed at harvest because of the strong putrid fishy smell emitted from the grain.

Closer examination of seed will reveal bunt balls, which are grains of wheat that have been replaced by a mass of stinking bunt spores. It is these bunt balls that break during harvest and seed movement that enable the disease to spread through a seed lot and infect the seed that will be sown next season.

Even though bunt infected plants may be shorter than healthy ones, it is difficult to identify a bunt infected crop before crop maturity. At maturity, bunted heads are darker in colour and have splayed glumes because of the large black bunt balls present within the glume. 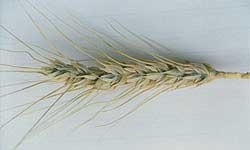 Bunt balls that break during harvest contaminate seed and soil.

When infested seeds are sown bunt spores germinate, and the fungus infects the growing point of the wheat seedling. Following infection of the young seedling the fungus grows within the plant, generally without producing symptoms until the head develops. When new seed begins to develop in the head, the fungus replaces the tissues of the developing seed with its own spores.

Bunt can survive in soil for at least a year and for many years on seed. Bunt spores prefer moist and cool conditions (5-15°C) for germination. Therefore, early sowing into warmer soils can help reduce the level of crop infection.

Grain Trade Australia's commodity standards have a nil tolerance for bunt in all grades of wheat.

Seed treatments are extremely effective in controlling bunt. However, seed treatments need to be applied every year, and a good coverage of grain is essential to prevent infection.

Following a bunt infection clean seed should be obtained. All machinery that handled infected grain should be thoroughly cleaned and wheat should not be sown back into an infected paddock for several years.

Loose smut of wheat is caused by the fungus Ustilago tritici (U. nuda). In Victoria, this disease is rarely seen because the regular use of seed treatments controls this disease.

Loose smut symptoms do not become apparent until ear emergence. At this time ears of infected plants emerge earlier, have a darker colour, and are slightly taller than the ears of healthy plants. On infected ears the florets are full of a mass of black spores. These spores are initially held by a thin membrane, which soon ruptures releasing spores. Eventually all that remains of the head is the bare stalk.

Ears of infected plants emerge early. The spores released from the infected heads land on the later emerging florets and infect the developing seed. Infection during flowering is favoured by frequent rain showers, high humidity and temperatures of 16-22°C. Eventually the wheat head is replaced by a mass of spores, ready to infect healthy plants.

Grain Trade Australia's commodity standards allow a maximum of 3 pieces of loose smut infected ear per half litre for all grades.

Using systemic seed treatments every year will effectively control this disease. Following a loose smut outbreak in a crop new clean seed should be sourced.

Historically flag smut, caused by the fungus Usrocystis agropyri, was an important disease of wheat in Victoria. However, in recent years this disease has been controlled with the use of resistant varieties and treatment of seed with fungicides.

Losses from flag smut of wheat, when the disease occurs, are generally in the range of 5 to 20 per cent, however complete crop losses are not unknown.

Flag smut is characterised by long, black raised streaks on the leaves, leaf sheaths, awns and sometimes on the stems. These black streaks break through the plant tissue, revealing a mass of powdery grey-black spores which easily rub off onto a finger.

Infected plants are often stunted so they are not always easily identified in the crop during the season. Infected stems are stunted, distorted and seldom produce ears. Infected leaves do not expand fully and remain rolled and twisted. Infected plants can produce many tillers, but not all tillers on a plant will exhibit symptoms.

During harvest the black spores are released from the plant contaminating seed and soil. Typically spores survive in soil for 3 years, but can survive for up to 7 years.

Soil or seed borne spores infect the new wheat plant before emergence. Infection is favoured by early sowing into relatively dry and warm soils. Optimal temperature for infection is 20°C, but infection may occur at as low as 5°C and as high as 28°C.

The fungus grows inter and intra cellularly between vascular bundles of the leaf tissue and other effected plant parts.

The regular use of fungicide seed treatments will control this disease.

Following a flag smut outbreak it is important to rest the effected paddock from wheat for several years and source clean seed.

This is a different fungus to the cause of covered smut of wheat. This disease is generally well controlled because of the regular use of seed treatments.

Effected plants usually do not show symptoms until ear emergence.

Infected ears typically emerge at the same time or slightly later than that of the healthy stems. Also, infected ears often emerge through the sheath below the flag leaf. All of the florets of infected ears are replaced by masses of dark brown to black spores. The spores of covered smut are held more tightly than those of loose smut.

During harvest the spores of effected heads spread and contaminate healthy grain.

At sowing the smut spores germinate at the same time as the seed and infect the germinating plant. Infection of seedlings is favoured by earlier sowing as the fungus prefers drier soils and temperatures of 15-21°C. The fungus grows systemically within the plant, usually without producing symptoms, and then it replaces the young grain with its own spores. 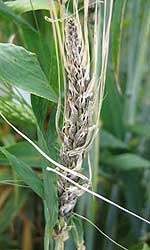 Grain Trade Australia's commodity standards have a nil tolerance for bunt in all grades of barley.

Covered smut of barley can be effectively controlled by using fungicide seed treatments every year.

Following infection new seed should be obtained from a clean source. Resistant varieties are available.

Loose smut of barley, like wheat, is caused by the fungus Ustilago tritici (U. nuda).

However, the strain of loose smut that attacks wheat does not attack barley and vice-versa.

Symptoms of barley loose smut are similar to those of wheat loose smut.

Until ear emergence effected plants often do not exhibit symptoms. Effected heads usually emerge before healthy ones and all the grain is replaced with a mass of dark brown spores. The spores are initially loosely held by a thick membrane that soon breaks releasing the spores onto other heads. Finally all that remains is bare stalks where the spores once were.

As loose smuts of wheat and barley have similar life cycles see the section on the life cycle of wheat loose smut.

The Grain Trade Australia commodity standards have a maximum tolerance of 0.1 gram of smut pieces per half litre in all grades of barley.

Following a loose smut outbreak in a crop new clean seed should be sourced.

Oats are affected by both loose (Ustilago avenae) and covered (Ustilago segetum var. hordei) smut. The field symptoms of these two diseases are often indistinguishable.

The regular use of seed treatments effectively controls these diseases.

Smut infections of oats are usually not apparent until head emergence.

At emergence, infected heads contain masses of dark brown to black spores that have replaced each grain. These spore masses are held in place by a thin membrane that often breaks allowing the spores to spread to healthy seeds.

Normally spores survive from one season to the next in contaminated seed lots.

At sowing the smut fungus infects the emerging seedling, and this is favoured by early sowing into warm seed beds. Following infection the fungus grows systemically within the plant without producing symptoms.

At flowering the fungus grows into the floret and replaces the developing grain with spores.

Following a smut outbreak in a crop new clean seed should be sourced.

Karnal bunt, also known as partial bunt, is caused by the fungus Tilletia indica and does not occur in Australia. It does occur in the USA, Mexico, India, Afghanistan, Pakistan and parts of Nepal and Iraq. It is most likely that if Karnal bunt was to arrive in Australia it will be initially detected in a seed lot because of its odour.

Karnal bunt is most likely to enter Australia either on diseased grain or as spores on travellers' clothing.

To prevent the introduction of this disease to Australia it is important that all seed imports to Australia occur through appropriate quarantine facilities, and that travellers to overseas farms thoroughly wash all clothing on return to Australia.

Suspect samples must be reported to Agriculture Victoria immediately.

Grant Hollaway and Frank Henry. Support by the Grains Research and Development Corporation is gratefully acknowledged.