Downy mildew is one of the most common fungal diseases of field peas in Victoria, and often causes substantial reduction in plant numbers in cool wet seasons. The disease is most severe early in the growing season when the crop canopy remains wet for long periods following rain or heavy dews. Warm, dry conditions prevent the spread of the disease. 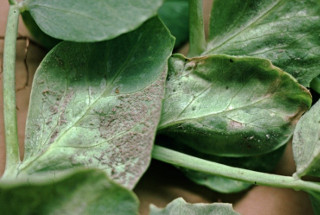 This disease is most common soon after seedling emergence, but it may affect plants at any stage of growth especially during periods of moist, cool weather.

Plants grown from infected seed are severely stunted and distorted, and have a sickly yellowish-green appearance. The undersides of the leaflets, in particular, are covered with a fluffy mouse-grey spore mass. Infected plants may turn yellow while producing an abundant source of spores, which cause secondary infections.

Secondary infection results in the appearance of isolated greenish yellow to brown blotches on the upper surface of leaves, while on the underside of the leaf, masses of mouse-grey coloured spores are produced. The fungus usually affects the lowest leaves and then progresses up the plant, sometimes infecting flowers and pods. Infected pods are deformed and covered with yellow to brownish areas and superficial blistering.

Downy mildew, caused by the fungus Peronospora viciae, survives in the soil and on old pea trash, and can also be seed-borne. Infected seed can act as a primary source for systemic infections. Systemic infection of plants can lead to the disease developing late in the season, if conditions are favourable.

The disease can develop quickly when conditions are cold (5–15°C) and wet for 4 to 5 days. This often happens when seedlings are in the early vegetative stage. 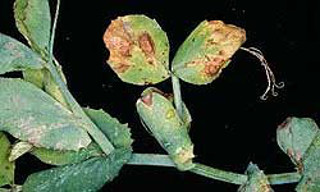 When individual seedlings become infected they act as a focus of infection from which the disease spreads. The disease also impairs formations of wax on the leaves that makes the plants very susceptible to damage by herbicides.

Heavy dews will promote release of spores, while rain is the major means of spore dispersal, and secondary infection. Dry, warm weather is unfavourable for the disease.

Downy mildew causes leaf damage and stunting of plants. Severely infected seedlings often die. A significant reduction in grain yield is likely when the disease is severe. Plants with low levels of infection usually grow away from the disease in late winter/early spring as temperatures increase and yield losses are small.

Growing a resistant variety is the most effective means of controlling downy mildew in districts prone to this disease.

At present, there are no commercial varieties with good resistance to the fungus.

The resistance of current field pea varieties to downy mildew is shown in the Victorian Pulse Disease Guide.

Seed treatments can be beneficial, and are recommended for districts where downy mildew occurs in most years.

Not all fungicide seed dressings have activity against downy mildew.

A break of at least 3 years between field pea crops is recommended.