In areas where large aphid populations occur, crop losses can be high due to reduced herbage production and grain yield. The virus is transmitted by a number of aphid species as well seed-transmitted in many pulse species.

CMV has the widest host range of any known plant virus and is distributed worldwide. The host range includes a large number of agricultural and horticultural crops including temperate pulses, pasture, forage legumes and weed species. 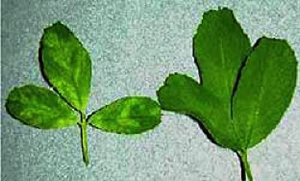 Symptoms of CMV on temperate pulses and pasture legumes are as follows: CMV is of economic importance in a range of crops worldwide.

In Western Australia, high levels of CMV infection in lupin crops have resulted in subsequent yield losses of up to 60 per cent, leading to the development of integrated management packages to control the disease (Jones, 2000). In Western Australian field experiments, CMV infection in Matilda lentils was shown to diminish shoot dry weight by 72 to 81 per cent, seed yield by 80 to 90 per cent and individual seed weight by 17 to 25 per cent (Latham et al., 2004).

The Victorian DEPI surveyed chickpea, faba bean, field pea and lentil crops in south eastern Australia for CMV from 2000 to 2010. More lentil and lupin crops were found infected with CMV than any other crop type, and the within-crop incidence of the virus was usually higher in these two crops than in the other crops surveyed. 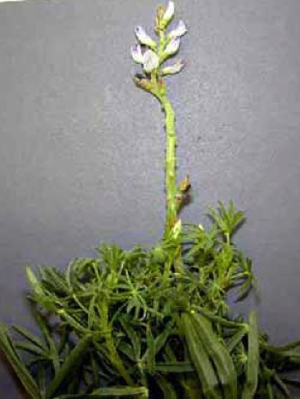 CMV is transmitted in a non-persistent manner by more than 80 aphid species.

The spread of the virus is generally over short distances as aphids only remain infective for periods from a few minutes up to a few hours.

During DEPI of the Wimmera cropping region over a number of years the following aphid vectors of CMV have been found:

CMV is transmitted via seed in a number of host species.

In Victoria, surveys of pulse seed-stock found that 7% of lentil seed samples, and 9% of faba bean seed samples had up to 0.2 per cent and 0.1 per cent CMV infection respectively.

CMV is also seed transmitted in a range of annual pasture and forage legume species at rates of 0.05 to 8.8 per cent.

The host range of CMV is wide and not restricted to the Fabaceae family.

All pulse crops grown in southern Australia are hosts of CMV. This includes major pulses such as:

As well as minor pulse crops such as grass pea (Lathyrus) and narbon beans.

Many pasture and forage legumes grown in the cropping regions, such as lucerne, vetch, medic, annual and perennial clover are also hosts.

During studies in Victoria and South Australia, a number of weed hosts were identified in crops and on roadsides including:

CMV on faba beans was a minor problem. Throughout the surveys the number of faba beans crops infected with CMV never exceed 10 per cent, and within crop CMV infection never exceed 4 per cent.

CMV is spread by sowing infected seed or by movement of aphid vectors from infected plants to healthy plants.

Low levels of seed infection in pulses may lead to the spread of CMV during years with high rainfall and subsequent early build up of large aphid populations. Chemical control of aphids is not an effective method for controlling CMV.

Growing crops adjacent to infected lucerne or pasture will increase the risk of crop infection.

Some seed companies sell lentil seed, which has been tested for CMV and AMV. Commercial seed testing companies will also test legume seedlots for seed-borne viruses such as CMV. If farmers retain their own seed it should be selected from crops which do not have virus symptoms or evidence of aphids.