Blackleg, caused by the fungus Leptosphaeria maculans, is the most serious disease of canola in Australia.

The severity of blackleg has risen in recent years due to increased acreage and intensity of production.

Although not common, yield losses of 50 per cent and greater have been recorded in some seasons with up to 90 per cent yield loss occurring in cases where L. maculans has overcome major blackleg resistance genes within certain varieties. These dark coloured raised fruiting bodies (pseudothecia) can easily be seen with the naked eye.

Date of spore release from the stubble is dependant on autumn rainfall. Higher rainfall results in earlier spore release and consequently may lead to increased disease severity. 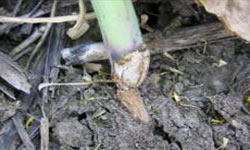 Once a lesion has formed, the fungus grows within the plants vascular system to the crown where it causes the crown of the plant to rot, resulting in a canker. Severe canker will sever the roots from the stem, whereas a less severe infection will result in internal infection of the crown restricting water and nutrient flow within the plant. 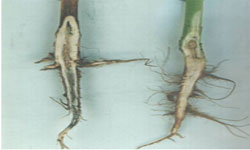 Blackleg is the most severe disease of canola but it can be successfully managed by:

The best defence against blackleg is varietal resistance. Always consult the current blackleg management guide for the most up to date ratings.

Blackleg rating data are collected each year from a number of sites in NSW, Vic, SA and WA. It is important to only consult the current blackleg rating guide as blackleg resistance ratings can change from one year to the next due to changes in the frequency of different blackleg strains.

A rating of MS is considered adequate for lower rainfall regions, while a minimum of MR is required for medium to high rainfall areas.

Varietal resistance alone is not enough to protect your crop from yield loss caused by blackleg. It is also crucial to avoid high levels of disease pressure by reducing exposure to large inoculum loads.

In most situations over 95 per cent of all blackleg spores in the atmosphere originate from canola stubble that was crop in the previous year. Older stubble does not produce many blackleg spores.

There appears to be little advantage in increasing the isolation distance past 500m.

Stubble management such as raking and burning or burial can reduce disease pressure by up to 50 per cent. However, it is not known how much stubble must be destroyed to achieve an economic benefit through decreased blackleg severity.

Extending the time between canola crops within a paddocks rotation sequence does not reduce disease severity due to the wind-borne nature of the spores. Paddocks that have been sown into 2 year old stubble do not have more disease than crops sown in paddocks with a 3 year break from canola.

Some growers have found that by planting all their canola crops on one part of the farm and then on the opposite side of the farm in the next year, has ensured isolation between the crop and the last years stubble.

There is anecdotal evidence that this practice has had positive impacts on canola yields.

Both fungicides give initial protection to canola seedlings which is when the plant is most vulnerable to attack from blackleg. However, fungicides do not always give an economic return.

The economic viability of using fungicides in other situations should be determined by monitoring the number of cankered plants in the current seasons crop. If more than 3 per cent of plants are cankered then the use of a fungicide may be warranted in future seasons.