Foliar diseases significantly impact hay and milling oat production. The most common and severe foliar disease of oats in south-eastern Australia is red leather leaf (RLL), caused by the fungus Spermospora avenae. This disease is favoured by wet seasonal conditions. Field surveys during 2019 found RLL in 90 per cent of oat crops in the medium and high rainfall zones. Red leather leaf was uncommon in low rainfall zones.

Initial infection appears as small, pale blue coloured lesions with a red/red-brown edge (Figure 1), typically during the tillering stages. During the stem elongation to head emergence stages, symptoms appear as red, irregular shaped lesions, which spread across leaves. Later in the season, affected leaves take on a ‘leathery’ appearance which turn a red, brown colour and may be slightly rolled (Figure 2). 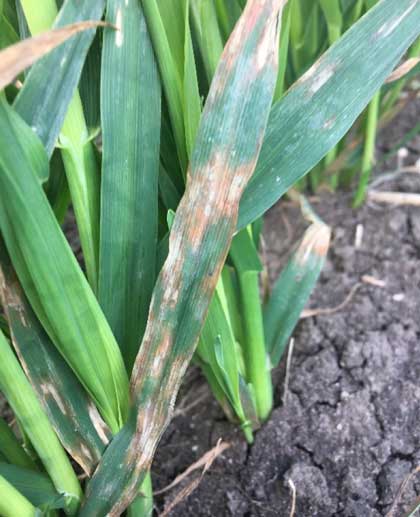 Primary infection is from mycelium on seed and spores from stubble during cool (5–16°C) wet weather. Symptoms are first observed during tillering and stem elongation stages. Secondary infection of the upper canopy comes from wind and splash dispersed spores during wet weather.

Red leather leaf has been found to cause 9–17 per cent (0.3–0.7 t/ha) grain yield loss in susceptible milling varieties and significant reductions to grain plumpness (screenings) and weight in the medium rainfall zone. Greater losses are likely in the high rainfall zone. In hay crops, red leather leaf has been found to significantly reduce plant biomass, height and stem thickness. Losses are greatest in varieties rated susceptible (S) or worse (SVS) and are less frequent in moderately susceptible (MS) or better rated varieties. Losses are also most likely during seasons with wet winters and early springs as this favours disease development.

Foliar fungicides have been found to provide suppression of red leather leaf, but do not provide total control. There are several products registered for oats which provide suppression. Speak to an agronomist about the best product for your crop.

Timing of foliar fungicide application is very important when managing red leather leaf in oats. Experiments conducted in the high and medium rainfall zones have shown that the best timing is mid-tillering (Z25) to stem elongation (Z31). This is because application coincides with early disease development. A second fungicide application may be required during favourable seasons as one application will likely be insufficient to provide lasting suppression.

It is important to follow labels rate for oats and rotate fungicides with different modes of action to minimise the opportunity for fungicide resistance developing.

Infected stubble is the primary infection source for red leather leaf. Avoid sowing oats into oat stubble from either of the previous two seasons. In general, allow 2–3 years before re-sowing oats into the same paddock to allow the inoculum to breakdown.

Support by the Grains Research and Development Corporation is gratefully acknowledged.