Botrytis grey mould is a serious, but sporadic disease of lentil in Australia.

The disease is capable of causing serious yield losses, particularly in dense, early-sown crops, when spring rainfall is high and there are prolonged wet periods.

All aboveground plant parts of lentil can be affected by botrytis grey mould.

Symptoms initially appear either on the crop canopy or on flowers and pods, depending on the location of the crop. The most damaging symptoms become apparent after the crop has reached canopy closure, and a humid microclimate is produced under the crop canopy. 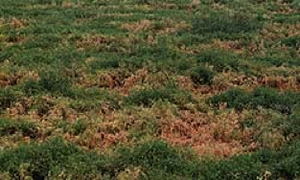 Note the dead patches of plants.

The disease first appears as small, discrete, cream coloured lesions on lower leaves. These lesions can enlarge and coalesce to infect whole leaflets which later senesce, and fall to the ground. Unlike ascochyta blight, no small black fruiting bodies (pycnidia) can be seen within the lesions.

If conditions remain conductive for disease, that is warm and wet under the crop canopy for at least 4 days, infection can spread to the lower stems. When that happens, lesions will girdle the stem and the stem will become covered with a furry layer of grey mould. This eventually causes stem death, and the whole plant dies. Often occurring before the onset of flowering and pod fill, infection will continue to spread, resulting in patches of dead plants within crops.

Pods which become infected will be covered in a grey mouldy growth . Some pods will rot and turn brown when dried out. 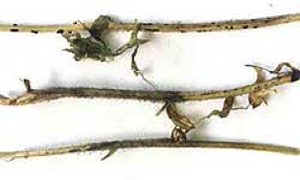 Note the formation of sclerotia by the fungus for survival.

Seeds within these pods fail to fill properly and are often discoloured and shrivelled. When infected seeds are sown pre-emergence root of seeds and damping off of young seedlings can occur. The stems of infected seedlings are often covered by masses of grey spores at the soil line.

The fungal pathogens Botrytis cinerea and Botrytis fabae that cause botrytis grey mould, can survive on infected seed, on infected trash, and as sclerotia in the soil or on alternate hosts.

Botrytis cinerea and B. fabae have a broad host range including:

Other host species include a wide range of ornamental and horticultural crops.

Old infected trash is an important source of fungal inoculum. Spores are produced on old trash and are carried by the wind into new crops where infection can occur.

Under favourable conditions of high humidity and moderate temperatures, the disease can spread rapidly; producing spores on newly infected tissue, and further spreading the disease within crops.

The development of botrytis grey mould epidemics is largely determined by the prevailing environmental conditions, especially the presence of moisture.

Botrytis grey mould can occur in all areas where lentils are grown, but is most common in districts with rainfall greater than 400mm.

Losses due to the disease can range from minor to very serious, depending on the lentil variety grown, location of the crop, time of infection and amount of spring rainfall.

Unprotected crops can lose up to 30 per cent of yield. In addition, seed can be discoloured due to pod infection by the pathogens, which reduces its market value.

Management requires a combination of:

When growing a new variety, obtain a copy of the variety management package for information on specific disease management.

Use a registered seed treatment for the control of seed-borne diseases in lentil.

Fungicides can have a deleterious effect on rhizobia. Therefore, seed should be treated with fungicide and then inoculated with rhizobia in two separate operations. Rhizobia should be applied to seed immediately before sowing, especially on acid soils.

The grazing or burying of stubble will reduce the carryover of disease into the following season.

Allow a break of at least 3 years between lentil crops.

Follow the recommended sowing rates and sowing dates for your district.

In areas of high risk, it may be necessary to apply foliar fungicides to protect the crop, especially if a susceptible variety is being grown.

Fungicides should be applied before canopy closure for best results. If conditions remain conducive for disease (warm and wet) follow up sprays may be necessary 12 - 14 days later.

Plan to harvest as early as possible to minimise disease on seed.

Detailed information on each of the pulse diseases can be obtained from: