Blackspot is a serious disease of field peas in Victoria and South Australia, however, it can be managed through an integrated approach using stubble management, rate and time of sowing, and chemical seed dressing.

Blackspot, sometimes called Ascochyta blight, causes a purplish-black discolouration and streaking of the lower stem. Severe stem infections may also cause stem or foot-rot which kills the plant. Conspicuous spotting of the leaves and pods also occurs. The leaf spots may be either small, irregular, dark-brown and scattered over the leaf, or a few large, circular brown spots. 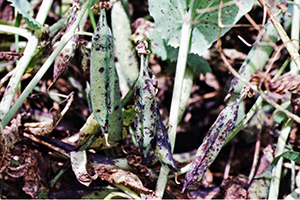 Spots on the pods may coalesce to form large, sunken, purplish-black areas (Figure 3). 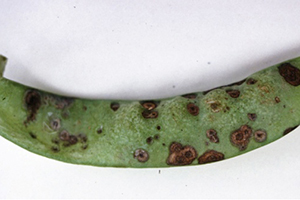 Infected seeds may be discoloured and appear purplish-brown. Discolouration is usually more pronounced on those areas of the seed coat next to diseased areas on the surface of the pod. Lightly infected seed may appear healthy.

Surveys have shown that Mycosphaerella pinodes predominates in Victoria.

The fungi that cause blackspot may either be seed-borne, soil-borne, or survive in pea trash. The disease usually becomes established when spores of the fungi, produced on old pea stubble, are carried into the new crop by wind.

Infection may occur at any stage of plant growth. During wet weather the disease may spread rapidly. Spores produced on infected plants are transferred onto adjacent healthy plants by wind and rain splash.

The disease can also become established by sowing of infected seed. The proportion of diseased seedlings arising from any infected seed lot is influenced by seasonal conditions and soil factors.

Moisture is essential for the development and spread of the disease. In a dry year, the planting of infected seed may not produce a diseased crop, but under wet conditions severe disease is likely.

The fungi are able to survive in soil for several years. Soil-borne inoculum can cause severe root rot and lesions on the lower stem.

The disease is widespread in field pea crops in Victoria, but its severity varies greatly from crop to crop and between seasons. In wet seasons heavy losses occur, but in a dry season, crop losses are light. However, individual crop losses as high as 45 per cent have been reported.

Blackspot is best controlled by destroying infected pea trash and self-sown plants. The severity of disease may also be reduced by crop rotation, by the use of disease-free seed, resistant varieties and by the use of a fungicidal seed dressing.

Seed should be tested to ensure it is clean. Only use seed if less than 5 per cent is infected. Using old or damaged seed can reduce seedling vigour and increase susceptibility to infection.

Refer to Seed Testing in Pulse Crops for information on where to have seed tested.

Destroying pea stubble by grazing and cultivation will reduce the disease risk by minimising the number of spores available to infect new crops. Self-sown peas must also be controlled to prevent carry-over of the disease.

Previous pea crop residues can harbour the blackspot pathogens. Aim for a separation of at least 500m from last year's pea paddock.

Avoid planting this season's crop in or near field pea stubble.

The blight fungi can survive in soil and on old pea trash; it is only safe to re-crop an area with peas after all pea debris has decomposed.

Peas should not be sown on land planted to peas the previous year nor on land adjacent to pea stubble.

Where possible, peas should not be grown in the same paddock more than once in 3 years. If disease occurs, the rotation should be extended to 1 in 4 or 5 years.

Follow the recommended sowing rates and sowing dates for your district.

A blackspot forecasting model is used each year to determine the ideal sowing time for Victorian field pea crops in relation to blackspot.

Avoid early sowing at high seeding rates. This increases exposure of pea seedlings to the ascochyta pathogens and produces crops with a large canopy, increased lodging and high humidity, all of which increase the risk of developing disease.

Fungicidal seed dressings registered for use on blackspot of field peas, when applied correctly, will control seed-borne disease and protect young plants from early infection.

It is recommended that all pea seed be treated with a fungicide. Where seed is to be inoculated apply the fungicide first and allow to dry. Apply the inoculum immediately prior to sowing.

Fungicides and inoculant should never be mixed together.

Fungicide applications for Blackspot control have generally not been economical in crops yielding less than 2t/ha. In some situations, applying mancozeb at 2kg/ha, at strategic timings (9 nodes and again at early flowering prior to significant rain fronts) can lead to economic disease control in high yielding pea crops (SARDI Field pea disease management guide - PDF).

Detailed information on each of the pulse diseases can be obtained from: