Subterranean clover stunt virus (SCSV) is the type member of the genus Nanovirus.

The natural host range appears to be restricted to legumes. SCSV is only transmitted by aphids in a non-propagative circulative manner, and is therefore not seed transmissible.

The virus causes severe reduction in growth and premature death of affected subterranean clover plants with dry matter losses of up to 65 per cent. SCSV also affects pulse crops and caused faba bean crop failure in some Victorian crops in 2003 and 2007. 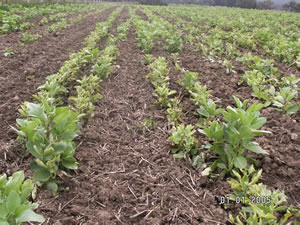 The general symptoms of SCSV on pulses, medics and clover species are chlorosis and stunting. Symptoms for individual crops and pastures are: SCSV is an economically important disease of pasture and grain legumes in Australia. The virus is currently estimated to cause average annual forage and seed losses in subterranean clover of 31 per cent and 35 per cent respectively.

This loss in production is estimated to cost the Australian wool industry $53.5 million.

In Victoria, in 2003, SCSV incidence in one faba bean crop was 80 per cent and caused crop failure. SCSV also caused the failure of three faba bean crops in Victoria in 2007.

In pulse virus surveys in Victoria in 2007, 40 per cent of faba bean and chickpea, and 8 per cent of field pea crops, were infected with SCSV. The within-crop virus incidence was 1 to 28 per cent in faba bean, 5-6 per cent in chickpea and 2 percent in field peas.

In 2007, surveys also found that 30 per cent of South Australia faba bean crops were infected with SCSV. The within-crop virus incidence ranged from 1 to 6 per cent.

The life cycle is completed on medic or clover pastures.

Black cowpea aphid (Aphis craccivora) is the most efficient vector, and is able to transmit the virus after short acquisition and inoculation feeding periods of 30 minutes each and a latent period of less than 24 hours.

The virus is also transmitted by other aphid species in a persistent manner:

The virus can be transmitted by grafting but is not transmissible through seed or by mechanical inoculation.

The host range of SCSV is wide but limited to family Fababceae.

Many clover and medic species are susceptible. The susceptible pulses and forage species include:

SCSV is a serious early season disease of faba bean and other pulse crops grown in south eastern Australia.

Pulse virus surveys in the last 11 years indicate that there is a serious outbreak of SCSV every 4 to 5 years in some faba bean crops.

Management options include using seed treatments for aphid control, and monitoring and minimising the spread of the aphids with insecticides. Rotation of medic, clover and pulse crops with cereal crops may also reduce virus infection.