The main source of this virus is lucerne, but it has a wide host range which includes the temperate pulses (chickpeas, faba beans, field peas and lentils) as well as pasture legumes and perennial weeds.

The virus is spread by a number of common aphid species, as well as being seed transmitted in some species.

Symptoms on the infected plant depend greatly on the strain of virus, host variety, stage of growth at infection and environmental conditions.

In many species, a bright yellow mottle or mosaic develops. Local or systemic necrosis and stunting may also occur.

Some species recover from early infections. In some species seed size may be reduced. Symptoms in the major temperate pulses, pasture legumes and host weeds are: The symptoms caused by AMV can be confused with those of nutrient deficiencies, physiological disorders and herbicide damage.

AMV survives in infected seed or plant hosts. It does not persist in stubble or soil. Aphids spread the viruses from seed-infected plants to healthy plants. Seed transmission rates of 0.1 to 5 per cent in lentils and 0.1 to 1 per cent in chickpeas have been recorded (Jones and Coutts 1996). AMV is transmitted from infected plants by aphids in non-persistent manner. This means that spread of the virus is generally over short distances, as aphids only remain infective for periods from a few minutes up to a few hours.

Although aphids rarely colonise chickpea plants, they still probe them as they move through the crop spreading the viruses.

There are over 20 species of aphid capable of transmitting AMV. During surveys of the Wimmera cropping region over a number of years the following aphid vectors of AMV were found: 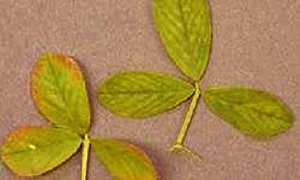 AMV has a wide host range that is not limited to plants belonging to the Fabaceae family. AMV can also infect a number of horticultural and vegetable crop hosts. 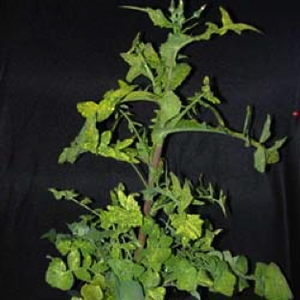 Incidence of AMV within individual infected lucerne pastures was high, with 50 to 98 per cent of plants infected (Jones 2004). Late infection with AMV in faba bean cv. Fiord diminished shoot dry weight by 41 per cent and seed yield by 45 per cent. Plants infected early in the season recovered sufficiently so there was no significant yield losses (Latham et al., 2004).

AMV was found in the majority of lucerne crops in surveys in New South Wales and ACT (Garran and Gibbs 1982).

Seed yield losses recorded due to infection of subterranean clover were 71 per cent with AMV (Jones 1992).

Surveys of pulse crops in the last 10 years indicate that AMV is an important virus disease of lentils, chickpeas and lupins in south eastern Australia.

AMV is spread by sowing infected seed or by movement of aphid vectors from infected plants to healthy plants. Low levels of seed infection in pulses may lead to spread of AMV during years with high rainfall and a subsequent early build up of large aphid populations.

Chemical control of aphids is not an effective method for controlling AMV.

Sowing healthy seed, managing weeds and other cultural practices to minimise AMV spread are recommend, such as:

Some seed companies sell lentil seed which has been tested for AMV and cucumber mosaic virus (CMV). Commercial seed testing companies will also test legume seed lots for seed-borne viruses such as AMV.

If farmers retain their own seed it should be selected from crops which do not have virus symptoms or evidence of aphids. See Seed health testing in pulse crops for a list of seed testing laboratories.