Bean leafroll virus (BLRV), also known as pea leafroll virus, is distributed worldwide but was not reported in Australia until 1999.

The virus is transmitted by aphids in a persistent manner but not through inoculation of sap or through seed.

Virus infected legume plants show yellowing, leaf rolling and significant reduction in pod setting. Yield losses of 50 to 90 per cent have been reported in Europe.

The natural host range is limited to the Fabaceae family.

The virus infection may be minimised by early spraying for aphids. Other control measures include sowing virus resistant varieties, aphid monitoring and spraying and eradication of virus source plants. The general symptoms of BLRV on pulses are: 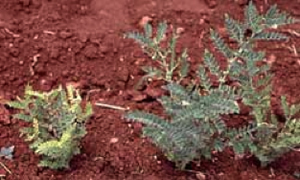 Symptoms on specific crops are: BLRV is transmitted by several aphid species in a persistent manner. It is not transmitted mechanically and not through seed.

Pea aphid (Acyrthosiphon pisum) is the principal vector of BLRV. The following species are also reported as vectors of BLRV:

The natural host range of BLRV is limited to the Fabaceae family.

Surveys of pulse crops in the last 10 years indicate that BLRV is an important virus of faba bean and field pea crops in south eastern Australia.