The yellow dwarf diseases of cereals have now been divided into two groups:

They are the most important virus diseases of cereals worldwide. They have a wide host range which includes wheat, barley, oats, triticale and over 150 grass species.

The virus is usually spread by aphids from infected grasses to crops. Wet summers and autumns promote growth of host grasses and build-up of aphid vectors resulting in early crop infection, severe symptoms and yield losses.

Symptoms take at least 3 weeks to appear after infection. They usually appear as patches of yellow or red stunted plants. The symptoms first appear where aphids have landed. Flying aphids may infect individuals or groups of plants dotted throughout the crop. If the aphids colonise the crop rings or patches develop which increase in size with time (Figure 1).

If crawling aphids move into the crop from adjoining pastures or crops then symptoms will appear along the fence line first.

YDV symptoms can be variable and can differ with host species, cultivar and time of infection. Sometimes, infection of cereals may occur without visible symptoms. However, distinct symptoms usually occur on cereals although many infected grasses are symptomless.

Symptoms include yellowing of the leaves, starting at the tip of the leaf and moving towards the base, resulting in brilliant yellow coloration of the leaves and interveinal chlorosis.

Early severe infections can lead to:

Late infections do not result in severe stunting but young leaves may turn yellow.

Symptoms vary between cultivars and leaf yellowing may be slight to severe with interveinal chlorosis.

Early severe infections can result in:

Late infections may only cause slight yield loss and slightly shrivelled grain.

Symptoms are striking and easily recognised as the infection causes the development of orangey-brown blotches on the leaves which spread until the whole leaf is bright red.

Early infections may cause:

Symptoms of YDV can be confused with those caused by nutrient deficiencies, water-logging or other plant stresses that cause yellowing and interveinal chlorosis or reddening of leaves.

The disease can be distinguished from nutritional deficiencies by its pattern of spread. Nutrient problems tend to be more uniform across paddocks.

Work in 1984 estimated yield losses caused by BYDV in Victoria to be 2% with up to 20% in individual crops.

The YDVs have a very wide host range in the grass family (Poaceae). 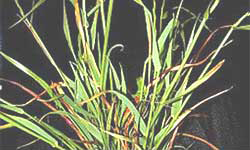 They survive between cropping seasons in volunteer cereals, annual and perennial pasture grasses and wild grasses. In Victoria, perennial ryegrass is the main reservoir of YDVs in the high rainfall areas.

The virus and vectors can survive in small pockets of surviving grass even in the low rainfall areas. The aphid vectors of the viruses tend to build up in autumn and spring on the grasses, and then move into cereal crops where they often develop colonies.

High rainfall areas have a greater build up of the grasses, virus and vectors.

There are at least six serotypes of the YDVs which are spread predominantly by different aphid vectors. The distribution and relative importance of the different types are largely dictated by the abundance of the aphid vector species. If samples are being tested, tests should include serotype PAV, MAV, RMV for (BYDV) and RPV for (CYDV).

The most common vectors found in Victoria are the:

The viruses are not transmitted by any other insects and are not transmittable through seed, soil or sap. The aphids need to feed on an infected plant for at least 15 minutes followed by a latent period of 12 hours, before the virus will transmit to a healthy plant. Aphids remain infected for the rest of their life.

YDV outbreaks are likely to be worse in years when wet cool summers allow larger than normal numbers of aphids and alternate hosts to survive summer — followed by a mild winter which favours the build up of aphid numbers.

Where resistant varieties are not an option, the management of aphid activity in crops especially early in the season to prevent its spread and or delayed sowing to avoid the main aphid flights in the autumn can reduce YDV infection.

Later sowing to avoid the main aphid flights will reduce the incidence of YDV but this needs to be weighed up against possible yield reduction from delayed sowing.

Resistant varieties when available are the preferred option for management. There are a number of oat and a couple of wheat and barley varieties with varying levels of resistance (refer to Victorian Winter Crop Summary).

It is vital to prevent spread of the virus by aphids during the first 8 to 10 weeks after crop emergence using insecticides. In situations where aphids are likely to be a problem in the first few weeks after sowing, a seed treatment containing imidacloprid could be used for protection.

Foliar sprays can be used early after crop emergence if aphids are easily found.

Later sowing to avoid the main aphid flights will reduce the incidence of YDV but this needs to be weighed up against possible yield reduction from delayed sowing.