Pea seed-borne mosaic virus is distributed worldwide. It was first introduced into Australia in 1978 in seed imported from Sweden. 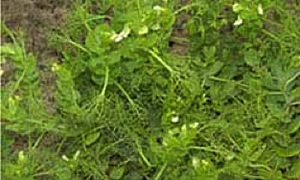 Its natural host range is limited to the Fabaceae family, and it infects pulse crops and pasture legumes. The virus may be symptomless, or show as mild mosaic symptoms on field peas and other legumes.

Seed transmission of this virus may be as high as 100 per cent in field peas, while reaching significant levels in other legumes. The virus is also transmitted mechanically and by aphids. PSbMV symptoms on plants are often difficult to identify under field conditions as the virus may be symptomless, or only show mild mosaic symptoms. However, pulse seed symptoms include brown rings or line patterns on the seed surface.

Symptoms of PSbMV on pulses are: The virus is believed to have spread worldwide through the exchange of infected seed.

In the USA, PSbMV infection has been reported in pea seedlots (3%) and in lentil seedlots (32 to 40 per cent). Research at the International Centre for Agriculture in the Dry Areas (ICARDA) found PSbMV was transmitted through lentil seeds at rates of up to 44 per cent.

PSbMV is also transmitted in a non-persistent manner by more than 20 aphid species, and by mechanical means. The natural host range of PSbMV is limited to the Fabaceae family.

A number of PSbMV pathotypes have been recognised by their ability to infect a number of pea differential genotypes.

PSbMV is of economic importance in field pea, faba bean and lathyrus mainly due to its effect on seed quality.

It was considered to be a minor disease because it was thought to only cause mild symptoms and minor yield loss. However, at ICARDA in Syria, glasshouse studies showed yield losses due to PSbMV in chickpea, faba bean, lentil and pea were 66 per cent, 41 per cent, 45 per cent and 49 per cent respectively (Makkouk et al., 1993).

In South Australia, glasshouse experiments showed that pathotypes P1 and P4 could reduce seed yield by 35 per cent and 82 per cent respectively (Ali and Randles 1998).

In New South Wales, DPI-Tamworth screening field pea germplasm in the field for resistance to PSbMV has shown that highly susceptible lines may be 100 per cent infected late in the season (Van Leur, unpublished).

Surveys of pulse crops over the last 10 years in south eastern Australia have shown that PSbMV is an important virus of field pea crops and that it can sometimes infect other pulse crops (Table1).