Bean yellow mosaic virus (BYMV) was first reported on French beans from the USA and the Netherlands in 1925, and is now distributed worldwide.

It has a wide host range which includes the temperate pulses and pasture legumes, tropical legumes and ornamental hosts.

The virus is spread by a number of aphid species non-persistently as well as being seed and mechanically transmitted. Symptoms of BYMV in the major temperate pulses and pasture legumes are: 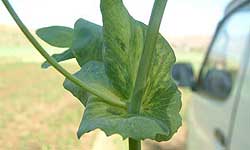 BYMV is transmitted by more than 50 aphid species in a non-persistent manner.

The main species worldwide are: During surveys in Victoria the following BYMV vectors in pulse crops were detected:

In Western Australia, the following MYMV vectors have been reported (Berlandier et al., 1997):

The virus is also transmitted through seed of most temperate pulses including:

In Victoria, the department found 18% of lentil seed lots tested had BYMV infections of 0.1-0.9%.

Seed transmission of BYMV in medics, clovers and weeds has also been reported in Western Australia (McKirdy and Jones 1995):

The host range of BYMV is wide and not limited to Fabaceae. The virus is reported to infect nearly 200 species in 14 families.

BYMV has a number of subtropical and tropical pulse hosts including:

It also infects ornamental hosts, the most common being gladiolus species.

In New South Wales a small survey showed that faba bean crops had an average within-crop incidence of BYMV of 26% of plants (ranging from 1-63%) (van Leur et al. 2002).

Field surveys in Western Australia in 1998-1999 showed that some faba bean and field pea crops were infected with BYMV and the within crop virus incidences were 31% and 18% respectively (Latham and Jones 2001).

Plot trials in Western Australia showed that lupins infected with the necrotic strain of BYMV can have grain yields reduced by 95% (Cheng and Jones 1999). Seed yield losses recorded on subterranean clover due to infection with BYMV were 58-76% (Jones 1992).

Pulse crop surveys in the last 10 years indicate that BYMV is a minor problem, but in some years the virus levels may be high in lupins, field peas and faba beans in south eastern Australia.

In 2009, chickpea surveys were conducted in Victoria, South Australia, Southern and Northern NSW. BYMV was not found in any chickpea crop sampled.

Seed is considered to be one of the main sources of BYMV, therefore sowing virus tested seed is recommended and commercial seed tests are available.

BYMV infected pastures are another major source of the virus, which is then spread to crops by aphids. Chemical control of aphids is not an effective method for controlling non-persistently transmitted viruses such as BYMV.

Pulse crops should be sown away from legume pastures to minimise the spread of BYMV. The spread of virus can also be reduced by controlling weed hosts in and around paddocks.