Scald is a common foliar disease in Victorian barley crops as the majority of current varieties are susceptible.

Scald severity varies greatly from crop to crop depending on variety resistance, paddock history and local climate. Scald is more likely to be a problem when a susceptible barley variety is sown into infected stubble from a previous crop or when infected barley grass is present.

The first signs of scald appear as water-soaked lesions on the leaf blades and sheaths. Lesions are ovate to irregular in shape, and change from a grey-green colour to a final straw colour with a distinctive brown margin. 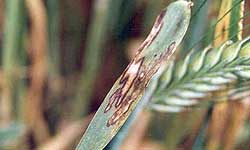 In severe infections, lesions coalesce and the pathogen may virtually defoliate the whole plant.

All of the above-ground parts of the plant except the upper stem can be infected. This includes the heads and grain which can be infected when rain occurs after ear emergence.

The symptoms of scald can be confused with similar symptoms caused by herbicide damage, nutrient deficiency or toxicity. Paddock history and the pattern of symptoms through the paddock should be considered to eliminate other factors which could cause scald-like symptoms. In Victoria, scald can cause yield losses of 10-20 per cent.

Field experiments in the Wimmera region of Victoria during 2010 and 2011 showed grain yield losses of between 12 and 18 per cent where scald symptoms affected between 20-60 per cent leaf area of the top three leaves.

The scald fungus (Rhynchosporium secalis) survives from one crop to the next predominantly on barley stubble and on barley grass.

Though considered less important, the fungus can also survive on seed from heavily infected crops.

Early in the season, following the opening rains, spores are released from the stubble to infect early sown barley crops. The disease is usually first observed in isolated patches when plants are tillering.

Further spread of the disease, within the crop, is by splash dispersal of the spores from one plant to another, and from old leaves to young leaves moving infection higher up the plant.

Serious damage is common in years of frequent rain, especially in the spring. By the end of the growing season the disease is usually evenly distributed within the crop.

The scald pathogen is pathogenically highly variable and able to change, which means that it often overcomes (or breaks down) the resistance in commercial varieties. It is therefore important to regularly consult a current Cereal Disease Guide to determine if previously resistant varieties have maintained their resistance.

Scald can be effectively controlled using an integrated approach encompassing:

Growing resistant varieties is the best means of managing scald. However, no resistant barley varieties are currently available.

Several moderately susceptible barley varieties are available which can provide improved scald control compared to those rated as susceptible. Consult a current cereal disease guide for up to date ratings.

Destroying infected stubble and barley grass by grazing, burning or cultivation can reduce the carry-over of the fungus between crops, but will not eliminate inoculum all together.

Rotating barley with other crops can provide opportunity for stubble inoculum to breakdown and reduce subsequent infection.

New, scald-free seed should be sourced if barley heads have been infected.

Seed and fertiliser treatments suppress early scald infection and provide an effective means of delaying the onset of an epidemic.

Additional foliar fungicides may need to be applied during the season if disease pressure is high.

There are a range of foliar fungicides available that will provide suppression of scald.

Experiments conducted during 2010 and 2011 showed that the best suppression of scald was achieved when foliar fungicides were applied between the beginning of stem elongation (GS 31) and flag leaf emergence (GS 39).

A single application of foliar fungicide may be insufficient to eliminate grain yield and quality loss. In some cases a two application strategy at both GS 31 and GS 39 may be warranted.

Application of foliar fungicides at ear emergence (GS 50) are likely to provide reductions in losses, however this may not be economically viable.