Regionally prohibited in the Mallee and Goulburn Broken catchments. 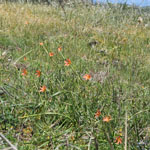 Cape tulip (one-leaf) is an erect perennial herb that grows from a bulb.

Stems are stiff, erect, somewhat zigzagged and branched near the summit 30 to 60cm high.

Corms (swollen, underground stems which stores food for the plant) are white, about 1 to 2cm in diameter, enclosed in a light brown fibrous tunic. One to three new corms are produced above the old corm each year. 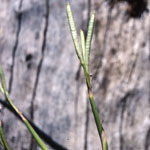 Cape tulip (one-leaf) usually only has 1 leaf per plant which is flat, ribbed, 1 to 2cm wide and 1m long. Flowers of Cape tulip (one-leaf) are orange or salmon pink(occasionally yellow) with a yellow patch in the centre. They are 3 to 5cm diameter and appear in small clusters at the ends of the branches. Flowers have 6 petal-like segments 2.6 to 4cm long. 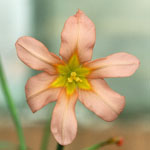 Seeds are brown, irregularly shaped that grow to 2mm long.

The weed is dispersed mainly by the movement of corms and seeds which contaminate farm produce, machinery and attach to the wool and feet of animals.

The dried plants, with seed capsules still intact, break off at ground level and are blown about by wind and carried by running water. Movement of gravel or soil from infested sites can also spread the corms and seeds.

Another major method of dispersal of Cape tulip (one-leaf) occurs in hay or silage cut from infested paddocks.

Plants are 2 to 3 years old before they flower and set seed.

Dense infestations can produce up to 7000 corms per square metre.

Seeds of Cape tulip (one-leaf) do not live long in the soil. Most germinate in the autumn following formation, and those that do not germinate during that season die.

The weed can produce up to 150 seeds per capsule with 8 capsules per plant amounting to 1200 seeds per plant.

Cape tulip (one-leaf) prefers semi-arid and sub-humid, subtropical scrublands on a wide range of soil types. It grows mostly in areas with annual rainfall of less than 600mm and does not establish well in shaded sites.

In Victoria, the weed grows in isolated patches, although it is extensive in some cases throughout the Wimmera, Western District and around Melbourne.

The icons on the following table represent the times of year for flowering, seeding, germination, the dormancy period of Cape tulip (one-leaf) and also the optimum time for treatment.

Cape tulip (one-leaf) grows best in open environments, such as grasslands and pasture, where it competes with and replaces desirable plants.

The plant severely impedes the growth and regeneration of indigenous ground flora.

Aerial parts of the plant are only present for 5 to 6 months each year. However, the root system, while not deep, is fine and fibrous.

All parts of Cape tulip (one-leaf) are toxic, although it is thought that the green leaves are far more dangerous than other parts of the plant.

It is poisonous to cattle, sheep and goats but is generally avoided by grazing animals. This results in desirable pasture plants being replaced by this weed and stock not grazing valuable pasture that is growing within the infested area.

All parts of the plant are poisonous if ingested.

Changes in land use practices and spread prevention may also support Cape tulip (one leaf) management after implementing the prescribed measures.