African daisy is a perennial herb or shrub. It can grow up to 3m tall and has yellow flowers.

Restricted in the Mallee and East Gippsland catchments African daisy has several stems growing from a central crown, generally 1 to 1.5m high but can reach a height of up to 3m.

When young, stems are soft and sappy. When mature, stems are stout and woody and grey-green to green in colour. They have parallel, raised ridges (or wings) that run the length of the stem and are serrated on the lower sections.

The stems of the young plants are usually covered with white hairs like cobwebs but become smooth and hairless upon maturity. 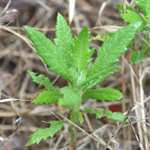 Leaves are dark green on the upper surface, leathery and rough, becoming hairless and often shiny.

The underside of the leaf is covered with dense white or grey woolly hairs.

Narrow, lanceolate (lance-shaped) leaves, 50 to 120mm long, and 3 to 25mm (typically 7 to 15mm) wide. Leaf margins have 2 to 8 forwardly directed teeth. Upper leaves may not have teeth.

Numerous yellow, flattened heads between 50 to 300mm across at the ends of the stems.

Each head consists of 40 to 200 or more flowers. Flowers are bell-shaped, 12 to 15mm wide, each surrounded by 18 to 22 bracts with hairy brown tips and up to 20 shorter, smaller bracteoles. Seeds are 1.5 to 2mm long, oblong to cylindrical in shape and brown or reddish-brown in colour. They have a pappus of fine hairs to 5mm long that is readily detached.

Seeds tolerate intermittent water logging and ranges in salinity between moderate to quite high.

The pappus of the seed is easily shed, so seed are rarely dispersed far from the parent plant by wind. Some dispersal can occur through seed moving in water over the ground. Seeds are also carried in mud which is stuck to animals, clothing and machinery or in contaminated agricultural produce and road-making materials.

Mature plants may persist for 7 to 10 years and produce approximately 50,000 seeds annually, with up to 80 per cent of seeds germinating in autumn.

It prefers humid and sub humid subtropical and warm-temperate savannahs, where it is mainly found on medium and lighter soil types.

It occurs as a weed of disturbed soils along roadsides and in denuded grazing land, newly-sown pastures, forest margins and wastelands. Also after events such as bushfires and clearing.

Numerous infestations of African daisy have been found in Victoria:

The icons on the following table represent the times of year for flowering, seeding, germination, the dormancy period of African daisy and also the optimum time for treatment.

African daisy is a strong competitor in natural environments and forms dense thickets that exclude native plant species, resulting in a reduction in habitat.

It contains toxic alkaloids but is rarely eaten by grazing livestock and competes aggressively with developing pastures and crops, often becoming dominant in the early years rendering infested lands unproductive.

Changes in land use practices and spread prevention may also support African daisy management after implementing the prescribed measures.