Regionally prohibited in the Wimmera, Corangamite and West Gippsland catchments.

Restricted in the East Gippsland catchment. Noogoora burr is an erect annual herb that grows to 3m high.

Stems of Noogoora burr are blotched or streaked with purple, somewhat zigzagged and covered with short, coarse, upward-pointing hairs. The leaves of Noogoora burr are dark green on the upper surface.

The lower leaves grow in opposite formation. The upper leaves alternate and are similar in shape to grape or maple leaves.

They grow to 15cm diameter and are dissected into 3 to 5 large lobes which are coarsely toothed. The leaves have a rough texture with minute bristles, glandular hairs and prominent veins. They grow on grooved stalks 10 to 20cm long, which along with the veins are a reddish or purple or green colour. 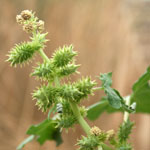 Noogoora burr flowers are inconspicuous. They are formed in clusters consisting of male and female flowers in leaf axils towards the ends of the branches.

Seeds of Noogoora burr are brown or black. Two seeds occur in each burr and are 6 to 10mm long, one larger than the other and flattened on one side. The Noogoora burr plant has a stout taproot and extensive lateral roots.

Noogoora burr plants are well equipped for dispersal because of their hooked spines which readily entangle in wool, fur, bags and animal hair.

Air cavities around the seeds assist the burrs to float on water, so much of their spread in Australia has been along waterways.

Burrs are commonly spread in agricultural seeds of summer crops such as maize, sorghum and sunflower. Burrs may also be spread through road construction activities.

A single, vigorous, open-growing plant can produce as many as 11,000 burrs. It has been calculated that provided no new burrs are introduced to an area, it would take 6 years to reduce the viable seed population in the soil to less than 1 per cent. Therefore, any control site must be monitored for longer than this period.

A close watch must be kept on re-infestation through flooding or the introduction of contaminated stock.

Noogoora burr prefers unshaded, warm situations in temperate regions, usually on fertile soils. They occur as weeds of cultivation, grazing land and wasteland that is subject to summer rainfall, flooding or irrigation. They extend into semi-arid areas by establishing close to watercourses.

Noogoora burr tolerates intermittent water logging, flooding at all growth stages and salinity ranges from moderate to quite high, depending on the ecotype.

The icons on the following table represent the times of year for flowering, seeding, germination, the dormancy period of Noogoora burr and also the optimum time for treatment.

This plant is common around waterholes and along:

On disturbed sites it can establish as dense patches. Noogoora burr is most likely to affect:

Noogoora burr is a significant weed of crops and pastures, forms very dense stands which are completely dominant and cover entire paddocks.

In Victoria, it affects tomato, sunflower and summer crops and is a weed of importance in the dried fruit industry.

The burrs may become entangled in sheep's wool and are a problem to shearers.

Noogoora burr is a major cause of 'vegetable fault' in wool. The burrs often mat the wool, particularly under the neck and on the belly of sheep, which results in serious damage to carding machines. Burrs cannot be mechanically removed and the wool must be carbonised. This process imposes an additional cost on production.

Burrs lodged in the hooves of animals cause irritation, infection and lameness. They can seriously reduce carrying capacity, and in some cases infestations may be so dense that sheep have difficulty accessing watering points.

Seeds and seedlings are poisonous to animals, particularly cattle and pigs.

Noogoora burr can cause dermatitis in humans and farm animals. Pollen from the plant may cause hay fever.

Changes in land use practices and spread prevention may also support Noogoora burr management after implementing the prescribed measures.