Chilean needle grass is a declared noxious weed and is classed as a restricted weed in all Victorian catchments.

Probably introduced in the 1930s and 1940s from South America where it occurs in Argentina, Bolivia, Ecuador, Uruguay, southern Brazil and Chile. The earliest Victorian record is from Northcote in 1934.

In Australia it occurs in temperate regions with annual rainfall of more than 500mm, mainly in pastures, on roadsides and public land.

Chilean needle grass (Figure 3) is a tussocky perennial in the speargrass group of grasses growing to about 1m high. The flowering head is a loose, sometimes interrupted panicle to 40cm long (Figure 4). These are the best feature to use in identification.

Two types of seeds are produced by Chilean needle grass:

Normal seeds (Figures 5 and 6) are produced at flowering. At the junction of the seed and the awn (tail of the seed) there is a raised crown (corona), a ridge of small teeth encircling the awn. The seeds of native Australian speargrasses (Austrostipa sp.) appear similar except they don't have the corona (Figure 6).

The seeds of Chilean needle grass are pale brown when mature, warty in texture, and hairless except along the midrib and near the callus (the base of the seed). They are mostly 8 to 10mm long, with a 1mm long corona and a 60 to 90mm long awn which is twice bent, with 15 to 30mm to the first bend. The awns do not readily detach from the seed and they often twist together at maturity. The seed is enclosed by 2 bracts (glumes) which are 16 to 25mm long, purplish in colour and taper to a point (Figure 5).

The stem seeds are located at the nodes (swellings which give rise to leaves) of the flowering stem and are concealed by the leaf sheath which has been removed for the photo (Figure 7). These seeds allow the plant to reproduce even if flowering has been prevented.

Chilean needle grass is becoming a serious pasture and environmental weed in south-eastern Australia. It is very invasive and forms dense stands in pastures, bushland and roadsides.

It tolerates drought and heavy grazing, giving it great potential to spread and over-run existing vegetation. The potential distribution of Chilean needle grass in Australia is estimated to exceed 40 million hectares. 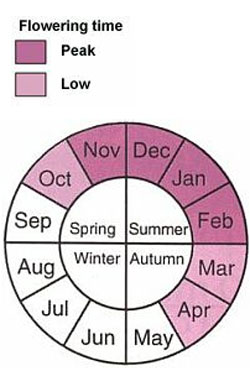 The presence of Chilean needle grass may reduce land value. During the warmer months large amounts of unpalatable flower stalks are produced, with very little leaf material, resulting in a severe reduction of summer stock carrying capacity. The vigour of Chilean needle grass can be partly explained by its efficient system of seed production.

Up to 15,000 seeds per square meter can be found in the seed bank beneath infestations. These seeds remain viable for many years. The seeds have very sharp points that have been reported to penetrate and damage the fleece, skin and eyes of livestock.

The sharp-pointed seeds readily become attached to the coats of animals, clothing and machinery. Floodwaters play a significant role in seed dispersal.