Restricted in the Mallee and Wimmera catchments 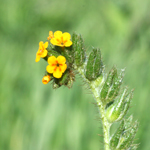 Amsinckia is an erect annual herb growing to 70cm.

Stems are green, branched or sometimes unbranched and covered with fine, stiff hairs or bristles. They grow erect and to a height of 30 to 70cm. 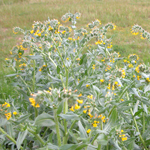 Both juvenile and adult leaves are present on plants.

Juvenile leaves include cotyledon leaves (seed leaves) which are distinctly 'Y' shaped with a round apex, a few fine hairs and small pimples on the upper surface.

Young plant leaves are spear-shaped and have a round apex with long stiff hairs or bristles on the upper surface.

Leaves alternate and are covered with short stiff hairs or bristles. Many of the bristles detach similarly to a nettle however, there is no associated sting.

Rosette leaves have a short stalk (petiole) while the upper leaves are stem-clasping with the petiole absent. Flowers are bright yellow to slightly orange and are positioned on one side of the stem. They have 5 fused petals forming a trumpet-shape.

Individual flowers are 5 to 10mm long surrounded with green hairy segments. Flower stems are 5 to 15cm long and uncoil in a similar way to fern fronds.

Mature flowers form small nuts at the base of the flower.

Consists of a bristly husk or burr (the calyx) which surrounds an egg-shaped group of 4 (sometimes less) nutlets with each nutlet containing a single seed.

Amsinckia is capable of producing viable seed on the lower flowers well before the last flower buds on the plant have begun opening. Flowers are self-pollinating.

Amsinckia may be dispersed by farm equipment and in contaminated fodder and grain. Dispersal can also occur when the bristly calyx gets lodged in the coats of feral animals and stock, as well as when seed is carried in the digestive tracts of birds and stock.

Road maintenance activities such as slashing and grading contribute to the spread of seed.

The germination of seeds in autumn gives the plants a competitive advantage over other desirable species.

Germination is staggered, with small amounts of seed germinating at any given time.

Reproduction of Amsinckia is by seed only.

Studies have indicated that stored seed will survive at least 2 years. However, observations of seed in the field suggest a greatly reduced survival rate.

Amsinckia prefers areas with an annual rainfall over 275mm and is found on a wide range of soils, including black clays, red loams and sandy soils.

Amsinckia may be found in degraded pastures, roadsides and in dry sandy areas.

In Victoria, Amsinckia infestations predominantly occur in the cereal belts of the Wimmera and Southern Mallee.

The plant is common on roadsides in the Wimmera and rapidly spreads by road maintenance activities such as slashing and grading.

The icons on the following table represent the times of year for flowering, seeding, germination, the dormancy period of Amsinckia and also the optimum time for treatment.

Amsinckia competes strongly with cereal crops and heavy infestations of the weed can cause large yield losses.

Early competition reduces tiller numbers in wheat. Seed from this plant can contaminate grain, affecting the quality of the flour's taste and colour.

The bristly calyx from the flowers of Amsinckia contaminate wool, whilst its leaves can be toxic to stock. Generally the leaves of the weed are unattractive to stock due to its bristles. The plant's leaves are known to be toxic (poisonous alkaloid) causing liver damage and skin photosensitisation.The plants' calyx easily lodges in the coats of stock.

Changes in land use practices and spread prevention may also support Amsinckia management after implementing the prescribed measures.