Devil's claw (purple flower) is a soft, pumpkin-like vine with an unpleasant odour. It is an erect low-growing annual herb.

Leaves are rounded to heart-shaped, 5 to 25cm across and grow in pairs (opposite) along branches. They are covered with glandular hairs and the stalks grow to 20cm long. 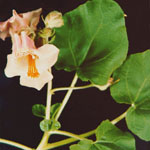 Flowers are creamy-white to purple spotted with dark purple and orange. They are trumpet-shaped, 2.5 to 5cm long and 5 to 7.5cm in diameter.

Fruit is 8 to 30cm long, brown or black and with a roughened, pitted surface. The claws are longer than the body of the capsule.

Devil's claw (purple flower) reproduces by seed and is dispersed only by the movement of seeds, usually whilst still within the fruit.

With its hooked claws, the fruit readily attaches to almost anything it comes in contact with.

Capsules adhere to wool, bag, clothes and animals, with seed falling from capsules as the transporting agent moves from one place to another. This mode of dispersal can transport seeds of distances over 200m.

Seeds are eaten by cockatoos, but it is not known if they contribute to the spread of the plant.

Devil's claw (purple flower) produces an average of 122 pods per plant with approximately 71 seeds per pod resulting in over 8000 seeds per plant.

As an annual, mature plants would produce viable propagules for only 1 year.

Seed viability of this plant is low and unlikely to affect land value.

Devil's claw (purple-flower) prefers sub-humid to humid, temperate to tropical regions mainly on highly fertile soils. This weed can be found on disturbed sites, such as roadsides, river flats and cultivated fallows.

The weed is uncommon in Victoria and appears to be less common than the yellow-flowered Devil's claw.

The icons on the following table represent the times of year for flowering, seeding, germination, the dormancy period of Devil's claw (purple flower) and also the optimum time for treatment.

Devil's claw (purple-flower) does not produce dense vegetation. It also has a minimal impact on the habitat of native fauna.

Small patches or isolated plants occur on roadsides, neglected areas and occasionally on fallows and in annual pastures.

Broad area infestations of this weed are rare.

The fruit of Devil's claw (purple-flower) can injure stock when caught in the mouth potentially leading to death by starvation.

It can also cause physical damage when the claws work into the animal's body or become attached to the feet.

The plant also poses possible damage to sheep carcasses and has the potential to have a major impact on the quality of the meat.

The weed is known to compete strongly with summer crops such as cotton, although there is minimal impact on yield.

The dried fruit pods can break the combs of shearing machines.

The plant exudes a slimy, sticky sap through its stems and the repugnant odour produced by the secretions on the leaves would make it unpleasant to walk through.

The claws of the fruit may cause injury to the bare feet of humans. The plant would have little or no impact on human traffic.