Artichoke thistle is a perennial herb with blue to purple flowers.

Restricted in the Wimmera, Glenelg Hopkins and East Gippsland catchments Artichoke thistle is a perennial herb.

Stems are greyish-green. Mature plant stems are strongly ribbed, covered in cottony down on the underneath and branched near the top.

Generally, only 1 stem develops from each crown but up to 8 may be produced.

Leaves are greyish-green on the upper surface and covered with a dense mat of white hair underneath. Artichoke thistle forms a basal rosette of leaves which can grow out (horizontally) to 1m in length and 30cm wide and sends up a stalk in the centre (or stem leaf) which is smaller, about 15cm long.

All leaves are deeply divided containing a sharp yellow-orange spine along the margins.

Florets are blue to purple with globular-shaped heads of 7 to 13cm diameter. These are surrounded by a series of stout bracts, each ending in a spiny tip.

Bears no fruit but seeds range from brown to black, 6 to 8mm long and are streaked lengthwise. They are equipped with a pappus of feathery hairs up to 4cm long that acts as a parachute to aid dispersal. 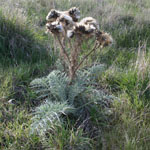 Seeds can also be spread by livestock, birds and flood.

Careless disposal of cut flowers and fragments of roots can also lead to the germination of new plants in favourable conditions. Soil movement may assist the spread of this plant.

The seedlings of the Artichoke thistle germinate year round but predominantly after the autumn rains.

Plants may flower in the first year of growth but is generally delayed until the second summer.

Most Artichoke thistle seeds can survive up to five years in the soil.

Native of the Mediterranean.

Artichoke thistle prefers poorer pastures and neglected areas such as roadsides, creek and river frontages, industrial areas and waste lands. It grows mainly in medium to heavy soils and in areas where rainfall is between 500 to 700mm annually.

There are many heavy infestations of this weed in Victoria.

The icons on the following table represent the times of year for flowering, seeding, germination, the dormancy period of Artichoke thistle and also the optimum time for treatment.

Some small birds feed on the seeds of the artichoke thistle and are responsible for increasing the spread along plantations, watercourses and fence lines.

Artichoke thistle has its greatest impact on agricultural land.

Once established, the weed shades out most pasture species as well as drawing moisture and nutrients from the soil.

The spiny nature of the plant deters sheep and cattle from grazing near heavy infestations. However, the plant will be eaten by livestock if no other food is available.

The plant is reported to cause contact dermatitis in some people.

Changes in land use practices and spread prevention may also support Artichoke thistle management after implementing the prescribed measures above.