Regionally prohibited in the Port Phillip and Western Port catchment. 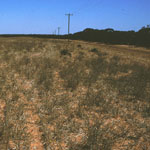 Skeleton weed is an erect, branched perennial herb growing to a height of 90cm. Aerial growth dies in autumn with new rosettes appearing in autumn and winter.

Stems of skeleton weed are dense with downward-pointing bristles at the base. They are otherwise hairless except for a few stout hairs. Stems are wiry, ribbed with many branches exuding a thick, milky latex when broken.

Leaves of skeleton weed are mostly hairless and often with purple pigmentation.

The rosette leaves grow to 20cm long, are deeply lobed with the tips of the lobes always pointing to the base of the leaf.

Skeleton weed leaves are similar in appearance to a dandelion leaf but the tips of these lobes point towards the tip of the leaf.

Skeleton weed sometimes lacks stem leaves. If present, they are small, narrow, inconspicuous, widely spaced and without teeth or lobes.

Leaves are variable in width and 3 distinct forms are present in Victoria. Broad and intermediate leaf forms have displaced the narrow leaf form which is well controlled by a rust fungus. 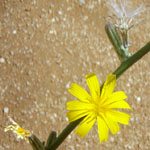 Skeleton weed flowers have yellow florets and usually 9 to 12 ray florets in each head.

Petals are strap-like, toothed at the top and white streaked beneath, with heads 1 to 2cm diameter.

Flowers have short stalks or sessile (have no stalks) and form in small clusters along the stems.

The seeds of skeleton weed are white to dark brown, 3 to 4mm long, ribbed with scales and tooth-like projections at the pappus end.

The pappus consists of toothed, white bristles 5 to 8mm long on a stem or beak about the same length.

The white and yellow seeds of skeleton weed are usually sterile while olive-green to brown seeds are usually viable. Skeleton weed reproduces from a long tap-root and by seed.

Most seeds germinate when placed on the soil surface, with 90 per cent germinating when covered with 6 to 7mm of soil.

It has parachute-like seeds which are easily spread by wind.

With their scales and tooth-like projections, the seeds become attached to wool and almost any fabric or material. They can also become caught in the crevices of machinery, vehicles and equipment. Contaminated hay and chaff have also been major modes of dispersal for this weed.

Cultivation is a major cause of local spread. When small patches are cultivated, the top 8 to 10cm of roots are cut and dragged to clean areas. If soil moisture is adequate, these pieces produce fibrous roots and new plants develop.

A single skeleton weed plant can produce more than 27,000 seeds in one season. Seed viability can be about 80 per cent, however, seeds are relatively short-lived in the field and do not survive more than 6 months.

Skeleton weed prefers temperate, subhumid and semi-arid open scrublands occurring in dry situations on well drained sandy to moderately textured soils. It does not readily establish on heavy textured soils. The plant is tolerant to drought, frost and waterlogging.

The icons on the following table represent the times of year for flowering, seeding, germination, the dormancy period of skeleton weed and also the optimum time for treatment.

It is a weed of cultivation and open waste areas with disturbed soils.

It is palatable and nutritious in the rosette stage and during flowering until the stems become woody.

Skeleton weed's competition for nitrogen and other nutrients has significant impacts on agricultural yield and harvest costs.

Difficulty in controlling the weed also affects the value of the land. Light infestations can cause wear and tear to harvest machinery, as well as delays through breakdowns. Heavy infestations can prevent harvesting as the plant's stems may become entangled so that many moving parts of the machinery become jammed. The sticky sap accumulates in harvesting machinery and slows grain movement adding to harvesting costs.

Dense growth of the skeleton weed may produce a moderate negative visual effect and may prove to be a nuisance to people on foot.

Changes in land use practices and spread prevention may also support skeleton weed management after implementing the prescribed measures.