Regionally prohibited in the Wimmera and East Gippsland catchments.

Restricted in the Mallee, North Central, and Glenelg Hopkins catchments.

Read more about the classification of invasive plants in Victoria 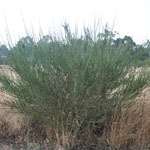 English broom has numerous erect, woody stems that are green to brownish-green and prominently ridged.

English broom has trifoliate leaves that occur either singularly or in clusters. They have short stalks and scattered hairs on the upper surface and are softly hairy on the under side.

Leaves are bright green, deciduous under dry conditions and over winter. New leaves are produced in spring around the same time as flowering starts. Flowers of English broom are bright yellow, pea-like and sometimes with red markings in the centre. They grow to 15 to 25mm long and occur singly or in pairs in the axils.

Young plants do not flower until the third year of growth.

Peak flowering is from October to December, but flowers can appear sporadically throughout the year.

English broom produces flat, brown or black pods as fruit that are hairy on the edges, mostly 25 to 60mm long and 8 to 10mm wide.

The pods ripen during summer and burst open due to heat, ejecting the seed up to 4.5m distance.

Some pods curl up after the seed is ejected. Seeds of the English broom germinate in both autumn and spring.

English broom is spread only by seed. Most seeds fall within 1m of the parent plant but seed pods can explode in the heat of summer and eject seeds up to 4.5m away from the parent.

Seeds in mud can attach to vehicles, machinery, footwear and animals. Floodwaters and animals can also contribute to spread.

English broom flowers prolifically, but only a small proportion of the flowers develop into fruits.

English Broom requires two to three years growth before flowering and commonly lives for 10 to 15 years but may potentially live up to 25 years.

The seed of the English broom, when stored dry, can remain viable for more than 80 years.

More than 80 per cent of buried seed can remain dormant and viable after 45 months. This can result in a large soil seed bank under mature plants.

The seed coat needs to be ruptured or damaged before the seed will germinate.

It is found mainly on slightly acidic soils and occurs on:

In Victoria, English broom is found on grazing lands in the southern, central and north-eastern regions, central highlands and many public land reserves and parks.

The icons on the following table represent the times of year for flowering, seeding, germination, the dormancy period of English broom and also the optimum time for treatment.

It has the ability to become the dominant species and smother native vegetation, particularly after fire events, due to strong seedling recruitment.

The weed also out competes poor or degraded pasture and reduces agricultural production, while providing harbour for a range of pest animals.

Changes in land use practices and spread prevention may also support English broom management after implementing the prescribed measures.