Restricted in the Mallee and East Gippsland catchments. Caltrop has numerous green to reddish brown stems radiating from a crown. It grows prostrate to 2m long with many branches and fine hairs.

Stems can be somewhat erect when plants are shaded or competing with taller plants. 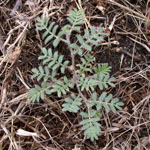 Leaves of caltrop are darker on the upper surface than on the lower. They are arranged in pairs, opposite on branches and unequal in size with each leaf consisting of 3 to 8 pairs of opposite leaflets.

Each leaflet is about 5 to 12mm long and 3 to 5mm wide, either sessile or very shortly stalked and hairy (more so on the lower surface) giving a silvery appearance.

Flowers are yellow, 8 to 15mm in diameter and borne on short stalks in the axils of the smaller of each pair of leaves.

Flowers each have 5 petals.

Flowers are short lived (opening in the morning and closing or shedding petals in the afternoon). The fruit of caltrop is a woody burr with sharp rigid spines to about 6mm long, with the burr about 1cm in diameter (excluding spines). The burr splits into 5 wedge-shaped segments when ripe with each segment containing 2 unequal pairs of spines. Each fruit segment may contain up to 4 seeds.

The fruit of the Caltrop is easily picked up by the feet of animals, vehicle tyres, rubber-soled shoes and almost any object which is placed on it, aiding spread over large distances. It is a common contaminant in vehicle cabins.

Fruit from the caltrop are formed continually throughout summer and autumn and up to 1000 fruit can be produced on each plant. Caltrop can produce upward of 20,000 seeds per plant.

It has become a weed of cultivated crops, orchards, over-grazed pastures, stock yards, roadsides and neglected areas, particularly in districts with high summer temperatures and dry sandy soils where there is little competition.

The plant's extensive root system allows it to survive droughts. It is also tolerant of some frost.

In recent years the plant has invaded horticultural and agricultural crops and pastures. It has spread on vehicle tyres from towns to farmyards and to nearby pastures and cropping land.

In Victoria, Caltrop is most frequently found in the north of the state, the Mallee, northern Wimmera and northern region.

The icons on the following table represent the times of year for flowering, seeding, germination, the dormancy period of Caltrop and also the optimum time for treatment.

Caltrop can be found mostly on dry sandy soils where there is little competition. Its presence may help to reduce soil erosion marginally during its growth and flowering period.

The weed grows best in disturbed areas with minimal vegetation. The plant has allelopathic properties which inhibit the growth of grass seedlings and its extensive root system competes effectively for moisture and nutrients. In dense infestations it can dominate the ground flora.

Spines on the fruit damage the feet of animals. When eaten, the fruit can harm the mouth and possibly the lining of the stomach and intestines. It is toxic to sheep and may present similar problems to native fauna.

Caltrop is a significant pest in crops as it is able to extract soil moisture from a great depth, allowing the plant to thrive under very dry conditions. In pastures, in the absence of other suitable fodder, animals will graze on new growth of Caltrop potentially causing stock losses due to its toxicity.

The weed contaminates harvested product, particularly in the dried fruit industry, and is a vegetable fault in wool.

The plant can cause some agricultural loss and its presence may affect land value.

Seeds and seed-segments of Caltrop cause injury to fruit pickers and shearers. Continuous interruption to remove the weed's spine may increase the time to harvest.

The weed is likely to affect recreational activities as its sharp, rigid spines on its fruit can easily penetrate human flesh causing discomfort. Dense infestations of the plant does not hinder human access.

Changes in land use practices and spread prevention may also support buffalo burr management after implementing the prescribed measures.