Boneseed is a woody, erect shrub and can have an effect on native vegetation.

Restricted in no areas in Victoria 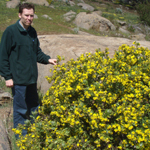 Boneseed is a woody, erect shrub growing to a height of 2 to 3m and 2 to 6m wide.

Stems are brown and hard, branching above ground level.

Leaves are alternately arranged and oval-shaped with a tapering base and irregularly toothed margins. They are green in colour, 2 to 8cm long with thin blades. 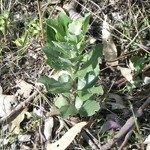 Flowers are bright yellow and daisy-like with 5 to 8 petals. Flowers are formed in late winter and spring, from August to October.

Fruit of boneseed is globular, 6 to 8mm in diameter and light brown when dry. Seeds usually fall in January or February.

The plant bears fruit from spring through to autumn. Boneseed is spread by seed only. Germination is promoted by fire, soil disturbance, weathering and ingestion of seeds by animals. Most seed is dispersed by animals such as foxes and birds or through water. Seeds may also be spread in soil stuck to vehicles and equipment. Boneseed flowers within 2 to 3 years in open areas. However, flowering can occur within 12 months after a fire. Growth is rapid, particularly in winter, and can invade both disturbed and undisturbed sites.

Boneseed is a prolific seeder and mature boneseed plants can produce up to 50,000 seeds per plant. The seedbank for boneseed can remain viable for at least 10 years.

Boneseed is not restricted by climate, but prefers sandy or medium-textured soils and disturbed situations. It is well adapted to fire, responding more rapidly than native species, even to low intensity fire.

Young growth is sensitive to frost, but plants are rarely killed.

Boneseed will not tolerate waterlogged soil or prolonged drought.

Boneseed can be found throughout south-eastern Australia and coastal New South Wales, where it is widespread, mostly as scattered plants or small populations.

The icons on the following table represent the times of year for flowering, seeding, germination, the dormancy period of boneseed and also the optimum time for treatment.

Boneseed impacts on native vegetation and can reduce the biodiversity values of bushland areas.

The weed may negatively affect wildlife through the displacement of essential food plants.

Changes in land use practices and spread prevention may also support boneseed management after implementing the prescribed measures.