Serrated tussock has flowering stems with many branches. Stems are initially erect up to 95cm long which droop to touch the ground at maturity. Serrated tussock has numerous leaves that are stiff, narrow (0.5mm in diameter) and grow to 50cm long. The leaf blade is round and may be smoothly rolled between fingers, where similar native species feel flat when rolled. Serrations can be felt by running the leaf between fingers from tip to the base.

The leaves are green in summer and yellow-green in winter with a white base. Tips of old leaves are bleached and fawn in colour.

Serrated tussock has a distinctive ligule which is rounded, white, membranous and hairless. It grows 0.5 to 1mm long and protrudes vertically at the junction of the leaf blade and the leaf sheath and is continuous with sheath margins. 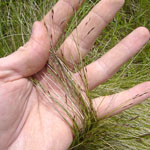 Serrated tussock produces small, inconspicuous florets towards the ends of branchlets on an open, branched panicle, which can grow to a length of 35cm. The arrangement of the flowerhead is open and dispersed with branches occurring in pairs and branchlets in twos and threes.

Flowerheads of serrated tussock have a distinct purple colour as seeds ripen in late spring and summer. Serrated tussock seeds are 1.5 to 2mm long. They are enclosed in two reddish-brown or purple bracts (glumes) which are 6 to 10mm long and which taper to a point.

The seed itself has a tuft of short white hairs at one end and a twisted awn which can be between 20 to 35mm long and is attached off-centre.

Serrated tussock is a prolific seeder with 90 per cent of the plant self-pollinating. Seed heads of the plant are carried along the ground and in the air and may be blown considerable distances, up to several kilometres.

The seeds of the weed are also dispersed by:

The seed takes 8 to 10 weeks to mature once flowering stems emerge and can remain dormant for approximately 6 months before germinating.

The weed persists for many years producing new flowering stems and some new leaves each year. The plant rarely flowers in the first year but continues its vegetative growth until the second summer when flowers and seeds are usually produced.

Seed production of serrated tussock is abundant and a hectare of dense tussock growth can produce more than 2 tonnes of seed annually. Large plants can produce 100,000 seeds a year. Seeds can remain dormant in the soil for up to 15 years and sometimes longer.

Serrated tussock can grow in a wide variety of climates with an annual rainfall of 450 to 1000mm. The weed is not limited by soil type or fertility but favours well drained areas. It is tolerant of freezing conditions.

The plant can be found across many areas of the landscape, including in:

The icons on the following table represent the times of year for flowering, seeding, germination, the dormancy period of serrated tussock and also the optimum time for treatment.

With its diffused and fibrous roots, serrated tussock has a long lifespan.

Seedlings of this weed are difficult to pull out of the soil. Dense infestations of this weed can pose a serious fire hazard with a recorded burn intensity of up to 7 times greater than native grasslands.

Seed heads create additional hazards where they build up against housing, sheds, roadsides and fence-lines, particularly in the rural and urban areas of outer west Melbourne.

Serrated tussock takes only seven years from establishment to dominate a pasture or native grassland, threatening rare native plant species and resulting in a loss of flora biodiversity. The plant is unpalatable and infestations commonly expand as other species are selectively grazed out. This excludes other ground flora and eventually reduces habitat for native fauna.

Serrated tussock is a serious weed of pasture with significant impacts on carrying capacity and a reduction in agricultural return. Its presence greatly affects land value. Livestock are unable to digest the plant due to its high fibre and low protein content, resulting in a loss of condition and in extreme cases starvation.

The seeds of serrated tussock also contribute to vegetable fault in wool which decreases quality.

Even in dense patches, this weed is unlikely to affect recreational activities or human access. Seed heads may accumulate in creeks and channels, slowing water movement and hindering fishing activities.

Changes in land use practices and spread prevention may also support serrated tussock management after implementing the prescribed measures.